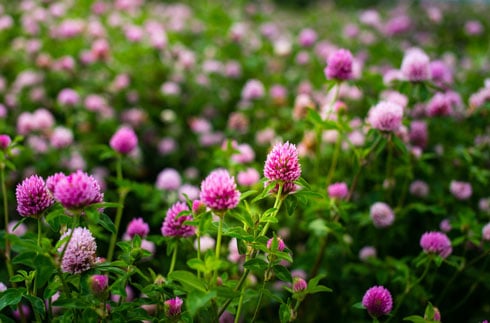 Red clover has long been touted as natural solution to menopause symptoms. But studies on the herbal remedy have shown mixed results.

In the double-blind study, researchers at Aarhus University in Denmark followed 60 women who suffered from severe menopause symptoms. They had at least five hot flashes a day. And they had reduced bone density. This is a sign of early osteoporosis.

Scientists gave half the women a drink that contained fermented red clover extract. The other half was given a placebo drink.

Researcher Max Norman Tandrup Lambert led the study. “We were speechless about the data,” he said. “There was a much greater effect than we hoped for.”1

By fermenting red clover, the herb became far more potent than the regular version, Lambert said. “Fermentation increases the bioavailability of the bioactive estrogen-like compounds, known as isoflavones or phytoestrogens, that red clover has in abundance,” he said.

After 12 weeks of drinking five ounces of fermented red clover every day, women went from an average of five hot flashes a day to just one. And the hot flashes they did suffer were less severe. The placebo group had just one less hot flash a day.2

The supplement also improved the women’s bone health. The women drinking fermented red clover had less bone loss than the placebo group, especially in the spine.3

Professor Lambert’s work recently was published in the journal PLOS ONE.4

About 75% of women suffer menopause problems. For some, the hot flashes and night sweats can be debilitating. But the most dangerous symptom of menopause may be bone loss.

It affects one third of menopausal women. This can lead to osteoporosis and fractures.5

The mainstream treatment is a group of drugs called bisphosphonates. They include Fosamax (alendronate), Actonel (risedronate), and Boniva (ibandronate).

These medications are linked to a wide array of serious side effects including cancer, atrial fibrillation, and even bone fractures.6

The new study shows that red clover is an effective natural alternative. Look for it online and in health food stores. You can find it in capsules and teas. In either case, be sure to order a fermented formulation.

If you have an estrogen-sensitive health condition such as breast cancer, be sure to check with your doctor before taking it.

Editor’s Note: Bone loss is just one more thing we have to worry about as we get older. But recent studies show that the symptoms of aging can be treated…or eliminated. Go here to discover specific ways you can stop the clock.