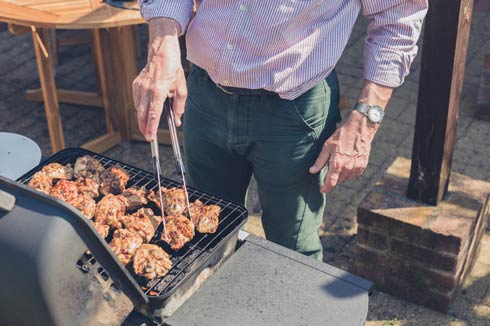 The last thing you want during a summer barbecue is a medical emergency.

But many of us unknowingly take a major risk as we crank up the grill and start steaks or burgers sizzling.

The problem can be so dangerous that Canadian doctors have called for a ban on this common piece of barbecue equipment.1

What is this hidden danger?

The U.S. Centers for Disease Control has issued a report on the dangers of wire grill brushes. The sharp bristles can break off when you use them. If you’re not careful, they can end up embedded in food. If swallowed, they cause all kinds of health problems.

The CDC report states that some 1,600 people have been hospitalized because of the wire grill brushes. “The severity of injury ranged from puncture of the soft tissues of the neck, causing severe pain on swallowing, to perforation of the gastrointestinal tract requiring emergent surgery,” according to the report.2

Last year the Canadian Society of Otolaryngology urged these brushes be taken off the market.

One Canadian man almost died after a bristle became lodged in his small intestine. For 18 months, he battled intense and unexplained stomach pains. Doctors couldn’t find out what was causing his problems. Finally, they discovered a grill brush bristle piercing his intestine. He had surgery to remove a section of his small intestine.

A Washington state woman suffered severe stomach pains after eating barbecued chicken. The pain became so great that she was rushed to the hospital. The trip saved her life.

Surgeons found that a bristle had punctured her intestine. She had emergency surgery to remove it. Following the operation, she came down with an infection that nearly killed her.3

6 Safe Ways to Clean Your Grill

Even though wire brushes remain widely available wherever grills are sold, stay away from them. There are alternatives that will safely and effectively do the job:

Onion: Yes, an onion. First, get the grill hot. Then cut an onion in half. Using a fork to hold the onion, rub the flat cut surface hard on the grill. The acidic juices clean the grates. This method is commonly used in Mexico.5

Potato: Use the onion method with a potato. There is a bonus: The starch in the potato heats up and transfers to the grill surface, forming a non-stick coating. This method works best if the food is placed on the grill immediately after the potato rub.6

Cleaning blocks. Commercial abrasive grill cleaning blocks act like a pumice stone. They are usually made from recycled glass. They may be called “grill stones” or “grill bricks.” They generally cost less than $10.

Wood blocks: Simply take a small wooden block—a six-inch length of a 2 x 4 works fine—and use it to scrape the grates. Be sure to use untreated, unpainted wood. Over time, the hot grill bars will make grooves in the wood, making it more effective.7

Non-Metal Brushes: Use a brush with nylon or non-metal bristles. They must be used on a cold grill.

Aluminum foil: Ball up a sheet of aluminum foil. Heat the grill. While using an oven mitt, use the foil ball to scrape the grates.

Barbecuing is an enjoyable and healthy way to cook. But if you’re using a metal grill brush, it’s time to toss it.