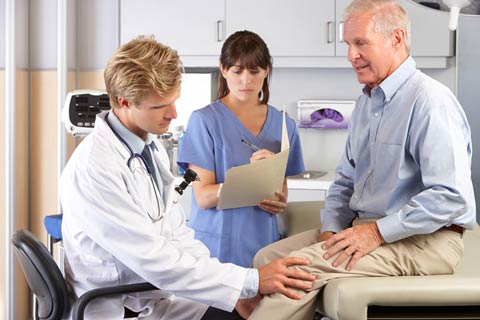 The conventional medication for knee pain is a deal with the devil.

Most of the nearly 50 million Americans with painful knees have osteoarthritis. And the drug of choice is celecoxib. It is one of the world’s biggest-selling pain relievers. Its main draw is that it is non-addicting.1

But as we’ve told you, celecoxib, sold under the brand name Celebrex, increases the risk of heart attack, strokes, and death by 37%. It increases your chances of an ulcer by 81%.2 3

Despite these dangers, 33 million Americans have taken the drug.

A new study shows there’s a safer, natural option that works just as well. It found the supplement chondroitin is just as effective at reducing knee pain as celecoxib—but without the health risks.4

Researchers at the University of Liège in Belgium gathered 604 people with knee arthritis. They were all 50 or older.

The subjects were randomly divided into three groups. One took 200 mg of celecoxib a day. Another took 800 mg of chondroitin sulfate. The third group took a placebo pill. All the pills were made to look identical.

The study was double blind. This means neither the patients nor the researchers knew which subjects were in which group until the study was over.5

As time passed, subjects took pain and function tests. At both three and six months, the chondroitin group had improved just as much patients taking celecoxib. Those in the placebo group did not improve at all.

Although knee pain relief was almost the same among chondroitin and celecoxib patients, there was one big difference… Twice as many celecoxib takers reported stomach pain.6

Why Most Chondroitin Supplements Don’t Work

Dr. Jean-Yves Reginster is a professor of public health at the University of Liège. He led the study, which was published in the journal Annals of Rheumatic Diseases.

He said that not all chondroitin products are effective. The ones sold in drug stores and supermarkets often contain cheaper grades of the supplement. Their study used what is called “European pharmaceutical grade” chondroitin.

Dr. Reginster says that both forms are needed to reduce osteoarthritis pain. One helps strengthen the joint. The other helps heal it.

Editor’s Note: There are other powerful, natural solutions that can help you conquer arthritis pain.