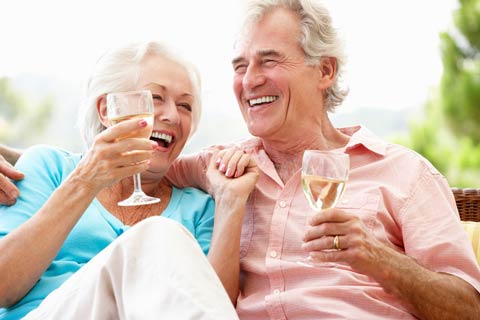 A drink or two a day can help you prevent diabetes.

That’s the surprising finding of a major new Danish study that followed more than 70,000 people.

It runs counter to the advice that doctors gave for years. They warned diabetics and prediabetics against drinking. They believed it caused dangerous blood sugar swings.1
But the new research shows the opposite is true—if you choose the right beverage.

Scientists at the University of Southern Denmark followed study subjects for five years. They examined their drinking habits and correlated it with their diabetes risk.2

The researchers found the “sweet spot” was 14 drinks a week for men and nine for women. People who drank this amount had significantly lower risk than those who didn’t drink at all or drank more.

Men in this range had a 43% lower diabetes risk than non-drinkers. Women’s risk dropped 58%.

The study looked at Type 2 diabetes. This is adult-onset diabetes, the kind that is linked to being overweight. About 95% of diabetics are Type 2.

The study found that when it comes to diabetes prevention, not all alcohol is created equal.

Wine was the most protective. Both men and women who drank seven or more glasses a week cut their diabetes risk significantly. The study did not look at whether there was a difference between red and white wine. Previous studies have shown that moderate red wine drinking prevents heart disease more effectively than drinking white wine.3

Women didn’t benefit at all from drinking beer. But men did. If they drank one to six beers a week, their diabetes risk fell 21%.

Hard liquor provided no benefit to either sex.

And people received the most diabetes protection if they spread their drinks out during the week, rather than downing them all in one or two nights.

More than half of American adults have Type 2 diabetes or prediabetes. The U.S. Centers for Disease Control announced recently that more Americans than ever have blood sugar issues. About 30.3 million have diabetes and 84.1 million have prediabetes.4

People with prediabetes have elevated blood sugar, though not as high as diabetics. About 70% of prediabetics eventually develop full-blown diabetes.5
Researchers don’t know exactly why moderate wine and beer drinking prevents diabetes. But they theorize it lowers insulin resistance.

Dr. Janne Tolstrup led the study. “Alcohol has been suggested to increase insulin sensitivity and lower fasting insulin resistance,” she said. “This might play an important role in the progression of diabetes. But the mechanism explaining our results is not clear.”

And researchers do not know why wine and beer are beneficial while hard liquor is not.

One theory is that wine and beer drinkers are less likely to drink soda. Sugary drinks are a major risk factor for diabetes.6

The study was published in the journal Diabetologia.

A glass of wine isn’t the only natural way to tame your blood sugar…  Some of the most powerful anti-diabetes weapons may already be in your kitchen.

Discover the seed that lowers fasting glucose levels by up to 40%… The ancient Turkish secret for preventing diabetes… And the delicious treat that controls blood sugar—and can help take an inch off your waist. Go HERE to discover all the details.