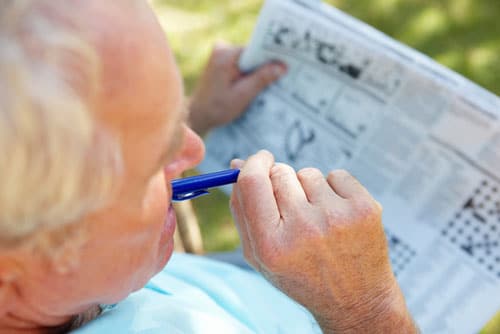 If you have a hard time identifying common smells, it could be an early warning of Alzheimer’s.

That’s the surprising finding of a new study at McGill University in Montreal. It looked at whether a simple smell test could reveal someone’s Alzheimer’s risk.

Researchers tested 300 people who had a family history of dementia. All the subjects were given scratch and sniff patches of common smells such as gasoline, bubble gum, and lemon. The participants also had their spinal fluid drawn and tested for markers of Alzheimer’s.

Those who had the hardest time identifying the scents had the most biological signs of Alzheimer’s.

Researcher Marie-Elyse Lafaille-Magnan is the lead author of the study.

“This is the first time that anyone has been able to show clearly that the loss of the ability to identify smells is correlated with biological markers indicating the advance of the disease,” she said.1

The study was published in the journal Neurology. The researchers hope to develop a scent test that can be used for early clinical diagnosis.

Until the test is available, how can you tell the difference between normal memory lapses and Alzheimer’s?

Is It a Normal Memory Lapse or Alzheimer’s?

The Alzheimer’s Association has compiled a list of 10 warning signs…along with memory problems that usually are unrelated to Alzheimer’s:2 3

It’s not Alzheimer’s: Forgetting names or appointments but remembering them later.

It’s not Alzheimer’s: Making occasional errors while balancing a checkbook.

It’s not Alzheimer’s: Occasionally needing help to use electronics

It’s not Alzheimer’s: Getting confused about the day of the week but figuring it out later.

It’s not Alzheimer’s: Vision changes related to cataracts or other age-related eye problems.

It’s not Alzheimer’s: Sometimes having trouble finding the correct word.

It’s not Alzheimer’s: Misplacing things from time to time and retracing your steps to find them.

It’s not Alzheimer’s: Making a bad decision once in a while.

It’s not Alzheimer’s: Becoming irritable when a routine is disrupted.

If you notice several of these symptoms and they seem to be increasing, don’t ignore them. See your doctor.4

Editor’s Note: Decades of brain research on one natural herb is impressive to say the least… And Big Pharma knows it. That’s why they want to turn this extract into an expensive Alzheimer’s drug. But you can get it now for just pennies a day. Get all the details on this memory miracle HERE.