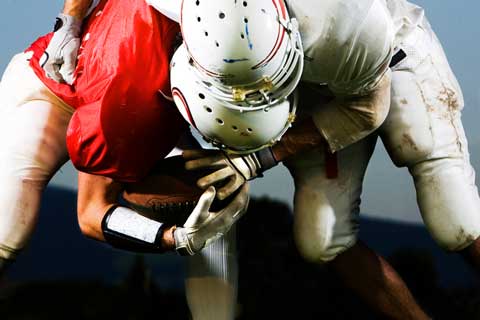 Is playing football a death sentence for your brain?

That’s the obvious conclusion of media reports about a new study of dementia in former NFL players.

Here are some of the headlines…

At first glance, the study is shocking.

Scientists at Boston University’s CTE Center looked at tissue from the brains of 111 deceased former NFL players. They found that 110 of the players were suffering from chronic traumatic encephalopathy (CTE).1

It is a devastating neurodegenerative brain disease that leads to a wide range of mental problems. They include memory loss, confusion, depression, anxiety, dementia, and suicide.

In previous studies, CTE has been linked to repeated concussions or blows to the head. And researchers have known for years that football and other contact sports that cause head trauma increase the risk of CTE.

But the numbers in the new study are so high that some people are wondering if the research means the end of football.

The Sporting News ran this headline: “After Latest CTE Study, How Much Longer Can Football Survive?”

Indeed, you have to wonder why anybody would ever play football—or allow their sons to play the sport—after this new research.

But when you look more closely at the study, you find the danger is likely far lower.

Media reports correctly stated that 110 of the 111 samples were positive for CTE. And the reports implied that those results mean that players have a 99% chance of suffering brain damage.

But here’s the problem with that assumption: The study was not a random sample of former NFL players.

All the players included in the study had symptoms of CTE before they died. So it’s not surprising that the study would find evidence of the disease in almost all their brains.

The players’ families donated the brains to science precisely because the players had suffered from cognitive problems. They wanted to aid research that would help prevent CTE.

In other words… If the study had the looked at the brains of non-football players with CTE symptoms, it is likely that it would have found similarly high numbers.

The lead researcher tried (unsuccessfully) to tamp down media sensationalism about her study. Her name is Dr. Ann McKee.

“Families don’t donate brains of their loved ones unless they’re concerned about the person,” she said. “So all the players in this study, on some level, were symptomatic.

“That leaves you with a very skewed population…these numbers are from very biased brain donation research.”2

That doesn’t mean football doesn’t cause CTE. Other studies leave little doubt of that. But we don’t know how prevalent it is. It is doubtful the percentage is 99%, as Dr. McKee herself notes.3
“These numbers are from very biased brain donation research,” she said.

Random samples and longitudinal studies that follow players over the course of their careers are needed to find out exactly what football does to the brain, Dr. McKee said.

In the meantime, don’t believe media hype that football is a brain death sentence.

Editor’s Note: If you’re worried about dementia, there’s something you should know…

The decades’ worth of study results on this natural herb extract are so promising… Big Pharma is trying to turn it into a drug. Get all the details HERE.