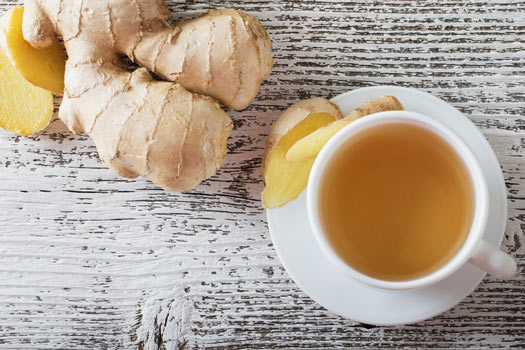 A major new scientific review finds that ginger may be the world’s most effective natural weight loss aid.

Chinese researchers did an in-depth review of previous studies on ginger’s effect on body weight and overall health. They found that adding a little ginger to your daily diet speeds your metabolism. At the same time, it fights hunger by making you feel fuller.1

One study cited in the analysis closely examined the effects of ginger on a small group of men. Their ages ranged from 19 to 50.

Each day, the men were given a breakfast of five mini-corn muffins and a glass of orange juice. Half the days they accompanied their breakfast with a cup of hot water. On the other half days, they added 2 grams (¾ tsp) of powdered ginger to the hot water.

After breakfast, the men completed questionnaires every hour for three hours about how hungry they felt. They were also tested hourly for six hours to determine their metabolic rate and energy expenditure.

On the days when their breakfast was accompanied by ginger tea, the participants reported less hunger and greater feelings of fullness. They also ate an average of 47 fewer calories than on non-ginger days.2

It takes roughly 3,500 calories to produce one pound of body fat. So if the men in the study had ginger tea every morning for breakfast, it would translate to a weight loss of about five pounds a year.3

Two other studies in the analysis looked at the effect of ginger on rats. One found that overweight animals given ginger daily lost weight steadily for 30 days. Another study showed that ginger was as effective for weight loss as the prescription obesity drug Xenical.4

That study also found that ginger increased levels of HDL or good cholesterol.

The review recently was published in the Annals of the New York Academy of Sciences.5

Why Ginger Works for Weight Loss

Ginger increases the thermic effect of food. This means it raises your body temperature and boosts your metabolism. In turn, you burn more calories.

Researchers found that ginger also reduces weight by suppressing cortisol production. Cortisol is a hormone produced during times of stress. It contributes to hunger and causes the body to store fat.7

Three Ways to Get Ginger into Your Diet

Ginger—fresh or powdered—is easy to add to your diet. And unlike prescription diet drugs, it has no side effects. Here are three simple ways to use ginger to lose weight:

Keep powdered ginger in an airtight container in a cool, dark place. It will last for several months.

Fresh ginger root will last in the refrigerator for about three weeks. If you freeze it, it will keep its potency for about six months.

Editor’s Note: What’s the secret to lasting weight loss? Here’s a hint: It has NOTHING to do with willpower… Discover why 93% of The Biggest Loser contestants gain back all the weight they lost on the show (and more)…why “cheat meals” actually help burn fat…and the little-known hormone that unlocks your true weight-loss potential.