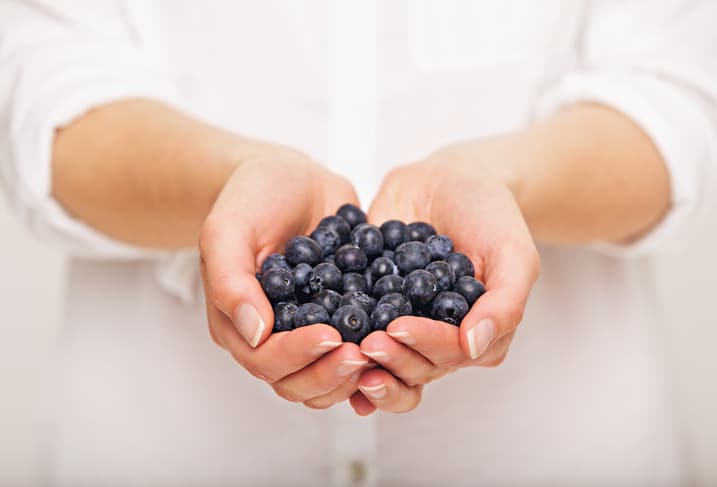 A new study shows that a daily dose of one kind of fruit juice increases blood flow to the brain, improving cognitive function and memory in seniors. Not only that, the findings suggest the juice reduces depression.

What is this miracle drink?

It’s the juice of a superfood that you may already eat: blueberry.

Researchers at the University of Exeter in England conducted the research. They gathered 26 seniors ages 65 to 77. At the start of the study, all subjects were given a battery of cognitive tests. The analysis included MRI scans to look at brain function and blood flow.1

The seniors were told not to change anything in their diet or lifestyle during the study.

Recommended for You: “One of the most promising new treatments for Alzheimer’s disease [that] may already be in your kitchen.” – Vanderbilt University

Scientist David Schubert confirms that if you give the spice to mice, “the [Alzheimer’s] plaques go away.” Time Magazine…CNN…Prevention…have all touted the brain-boosting power of this natural compound.

You can find the extract in just about any health food store. But chances are, you’ve already got the herb in your spice rack. Go HERE for more details.

Fourteen of the subjects were given a daily placebo liquid. Twelve were given 30 ml of concentrated blueberry juice. This is only two tablespoons. But it is the equivalent of about 1½ cups of fresh blueberries.

The placebo group showed no improvement.2

The researchers are now preparing to do a larger study to determine if there are even greater benefits if the juice is taken for a longer period.3

The Healing Power of Blueberries

Blueberries are believed to contain the highest antioxidant capacity of all commonly consumed fruits and vegetables. Much of their healing power can be traced to a family of antioxidants called anthocyanins.4

Heart Disease. A Harvard School of Public Health study found that regular consumption of foods with anthocyanins reduce heart attack risk by 32%. In another study, consuming 1.7 ounces of blueberries a day for eight weeks lowered blood pressure by 4-6%.5

Cancer: The vitamin C, vitamin A, and phytonutrients in blueberries function as powerful antioxidants that protect cells against free radical damage. They inhibit tumor growth and decrease inflammation. The beneficial compounds have been shown to help ward off cancer of the esophagus, lungs, mouth, pharynx, pancreas, prostate, and colon.7

Diabetes: Research has found that the anthocyanins in blueberries promote insulin sensitivity and glucose metabolism. This lowers the risk of type 2 diabetes and metabolic syndrome.8

Aging: DNA damage is one reason we grow older. The high levels of antioxidants in blueberries help neutralize damage to our DNA caused by free radicals in our bodies.

In one four-week study, 168 patients drank 34 ounces of a mixture of blueberry and apple juice every day. At the end of the study period, oxidative DNA damage due to free radicals was reduced by 20%.9

Eating blueberries and drinking blueberry juice is a great way to improve your health. But if you want to drink the same kind of concentrated juice used in the recent brain study, you’ll likely have to order it online. One excellent brand is Swanson Organic Blueberry Super Concentrate.

If you’re worried about staying mentally sharp as you grow older, there’s something else you should know… The decades’ worth of study results on this natural herb extract are so promising, Big Pharma is trying to turn it into a drug. Get all the details here.