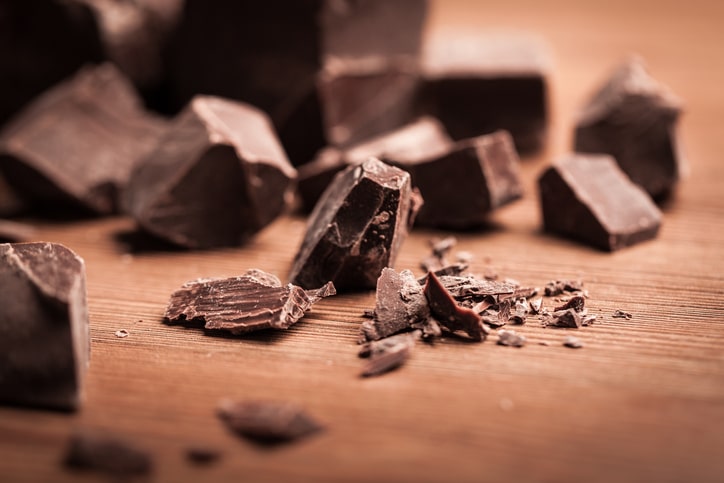 A study just published in the journal Appetite found that people who never or rarely ate chocolate are at greater risk for diabetes. In fact, they have almost twice the risk compared to those who eat chocolate at least once a week.1

The new research was done by the Maine-Syracuse Longitudinal Study (MSLS), a massive ongoing project that has tracked age-related health issues since 1976. It is headquartered in the Department of Psychology at the University of Maine.

The surprising findings regarding chocolate were discovered by examining 908 adult nondiabetics and 45 diabetics.

Director of the MSLS, psychology researcher Merrill “Pete” Elias, says “consuming chocolate at least once a week very much appears to be a win-win.” Especially for people at risk for diabetes.

And you don’t need to eat much. Just one ounce—about a third of a regular-sized chocolate bar—a week helps prevent diabetes, researchers found. But more doesn’t mean better in this case… Researchers found that consuming more than an ounce of chocolate each week doesn’t further decrease the risk of developing diabetes.

While they didn’t track what kind of chocolate subjects ate, researchers noted that dark chocolate contains more flavanols than milk chocolate. These compounds are associated with healthier arteries and better memory.

Recommended for You: “Chocolate euphoria” without the extra calories…and lose weight at the same time?

You know that glorious feeling of biting into a piece of creamy milk chocolate that melts in your mouth…and then the guilt that follows as you think of all the calories and sugar you just ate? Now you can get that same feeling without the chocolate at all—or the calories.

Think how much easier dieting could be if you could still get all the feelings of eating chocolate without the guilt. Go HERE for more details on this “chocolate euphoria” weight loss secret.

The Best Chocolate for Good Health

There is only one chocolate to eat for better health: dark chocolate. Milk and white chocolates contain more sugar and less—sometimes zero—cacao, the ingredient that gives chocolate its many health benefits.

The higher the concentration of cacao, the better. About 70% or higher is excellent.

Dark chocolate is loaded with health-boosting compounds. They include the powerful antioxidants resveratrol and polyphenols. It also contains saturated and monounsaturated fats. Your body needs both for optimal health.

It prevents food cravings. Cacao powder is rich in theobromine. It’s a little-known compound that allows you to lose weight without feeling tired, grumpy, and hungry all the time. A study in Denmark found that people who ate dark chocolate were less hungry—and had fewer food cravings—than participants who ate white chocolate.

It supercharges exercise. Research in the Journal of the International Society of Sports Nutrition tracked cyclists who ate 1.4 ounces of dark or white chocolate every day for two weeks. By the end of the study, cyclists who ate dark chocolate used less oxygen, were less tired during a two-minute sprint, and could cover a tenth of a mile more than the white chocolate group.

One note of caution: Some brands of dark chocolate contain high levels of toxic heavy metals. We recently told you which brands are safe. Read this list before your next grocery store trip.

If you’re worried about diabetes, there’s something else you should know…

There’s a toxic chemical found in dozens of products—ones you have in your home right now—that doubles your chances of developing diabetes. Go HERE to discover all the details.