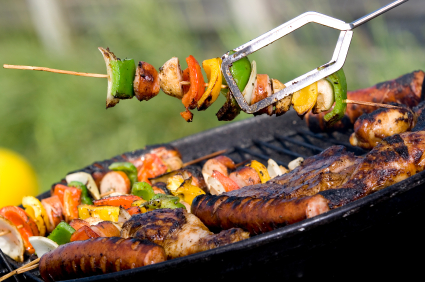 We’ve told about the dangers of processed meat. In fact our article on the topic went viral, crashing our server—twice. But there’s another hidden danger you should know when it comes to meat. If it isn’t grilled properly, it can be dangerous. That’s because it can create certain compounds that “cause changes in DNA that make cancer more likely to occur,” said registered dietician Alice Bender, of the American Institute for Cancer Research.1

So, before you fire up the grill, follow these five tips to cut your risk…

1. Select lean cut meats – Of course, that rules out processed meat. Hot dogs, sausages, and other processed meats are loaded with sodium and artificial ingredients. Sodium nitrite forms cancer-causing nitrosamines in the human body.2 And this leads to a sharp increase in cancer risk. Choose 100 percent organic lean cut beef, chicken, and fish. Just select the meat with the least amount of fat. Cuts graded “Choice” or “Select” usually have the least amount of fat.3

2. Marinate – Studies show that marinating meat for at least 30 minutes before grilling can reduce the formation of cancer-causing heterocyclic amines (HCAs.)4 HCAs are formed by the condensation of creatinine with amino acids when meat is cooked.5 Wine, vinegar, and lemon juice make great marinades. Mix them with some herbs and spices to kick up the flavor while lowering HCAs.

3. Pre-Cook – Another carcinogen called polycyclic aromatic hydrocarbons (PAHs) develop when smoke engulfs meat during grilling. The best way to reduce PAHs is to limit the time meat is on the grill. Pre-cook the meat in an oven or stove. But once meat is preheated put it on the grill immediately to prevent bacteria from spreading.

4. Cook on low heat and avoid flare-ups – Cooking the meat over a low flame can reduce the possible formation of carcinogens. More heat equals more HCAs. And if you burn or char the meat you can cause flare-ups by fats and juices dripping into the fire and producing more smoke. The smoke billows out of the grill coating the meat in PAHs.

The fix? Move coals to the sides of the grill and cook meat in the center to prevent too much heat. Lower the heat on gas grills. Another way to avoid flare-ups is to always clean your grill after cooking.

And don’t over-cook the meat. We recommend medium rare. Eating too much well-done meat has been shown to increase the risk of colon cancer two to five times…breast cancer by two to three times…And it’s also linked to stomach, pancreatic, and prostate cancers.6

5. Add color to the grill – Vegetables and fruits off the grill are delicious and they don’t produce carcinogens. Grilling brings out their natural sugars making them taste sweeter. And they contain cancer-fighting compounds like fiber, vitamins, and antioxidants. Onions, zucchini, eggplant, bell peppers, and tomatoes are all great choices to add variety and cancer protection.

By picking the right meat, marinating, pre-cooking and adding lots of veggies and fruits you’ll get all the flavor, minus the cancer risk.