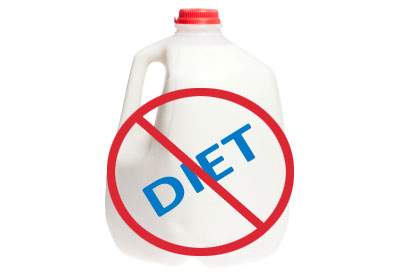 Diet milk may be coming to a dairy case near you. You just may not know it. That’s if the dairy industry gets its way.

With low-fat diets on the rise people are drinking less and less milk. Since 1975 milk consumption has dropped 30 percent.1 It dropped three percent last year alone. Schools are pulling high calorie chocolate milk out of cafeterias. So the dairy industry is getting hit hard with their best buyers—kids.

But Big Dairy has cooked up a way to compete with low-calorie diet foods. Follow the industry’s lead. Dump aspartame and artificial sweeteners into everything they can.2

The FDA has an official definition of what “milk” is. And that doesn’t include aspartame… yet.

That’s why Big Dairy is taking it up with the FDA. The International Dairy Foods Association (IDFA) and the National Milk Producers Federation (NMPF) have put in a petition. They want the FDA to let them add artificial sweeteners without a new label. They actually want the FDA to change the technical definition of what “milk” is to suit their needs.

Take chocolate milk for example. They want to swap the added sugar for a zero-calorie sweetener to make it “healthier.”

Big Dairy claims that by adding aspartame and other artificial sweeteners, they would be promoting healthy eating. And that brings up their second problem… What kid is going to pick up a carton of “diet” chocolate milk with “low-cal” splashed across the label?

“Kids don’t like the term ‘low-calorie,'” says Greg Miller of the National Dairy Council. “It’s a turnoff.” And moms are turned off by the term “artificial sweeteners.”  People are finally catching on that many come with big risks. Aspartame has caused controversy since its approval in 1981. By 1998, 80 percent of complaints to the FDA about food additives involved aspartame.4 And it’s no wonder why with people suffering headaches, dizziness, nausea, memory loss, blurred vision, and depression. The list goes on and on.

Many dairy products already include chemical sweeteners.5 Only now the label has to disclose it.  But if the FDA passes the petition, no label would be necessary.

And the petition doesn’t stop at milk. If Big Dairy wins, they could secretly include aspartame or any other artificial sweetener in 17 total dairy products. That includes yogurt, sour cream, and whipping cream. Common every day foods. And you’d never even know.

As a rule, we recommend limiting dairy. We’ve reported on the dangers before.6 Studies have linked milk to anemia, high cholesterol, respiratory problems, and severe stomach pains. With this looming new risk, it may be best to steer clear altogether. Unless you’re lucky enough to have access to raw dairy.

The FDA’s stance is that artificial sweeteners are safe. So they may just let them secretly slip into nearly every food on the dairy aisle.

From GMO’s to artificial sweeteners, this is an important moment for truth in labeling. As consumers we need to have our voices heard. The FDA has opened the petition up for public comment. And consumers are speaking up. One group, SumOfUs already has over 90,000 signers on a counter petition.7  Click HERE to read the petition and to voice your opinion until May 21, 2013.