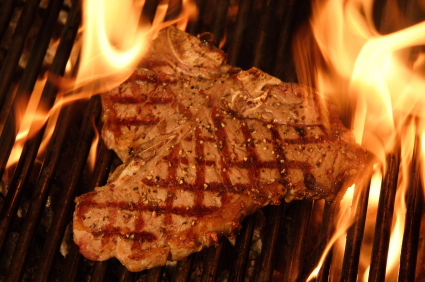 A new study just published by the American Journal of Clinical Nutrition states vegetarians have a 32 percent reduced risk of heart disease.1

British researchers are raving about the results from their study that followed nearly 45,000 people over a 10-year span. Subjects lived in England and Scotland. And a third were said to be vegetarians.

This is the largest study to date from the UK comparing the rates of heart disease between the two diets.

Throughout the study participants completed diet and lifestyle questionnaires. And researchers took blood pressure and cholesterol readings to compare the groups.

“The results clearly show that the risk of heart disease in vegetarians is about a third lower than in comparable non-vegetarians,” said study co-author Tim Key.

But wait… Before you throw out that NY strip for tonight’s dinner let’s take a closer look at the study.

Let’s start with the real figures. Out of all the participants, only 1,066—2.4 percent—were hospital diagnosed with heart disease.2 And only 169 died from it. When you do that math, it drops the vegetarians’ heart disease risk to only 1.7 percent. That’s a big difference from 32 percent.

And if we continue to dig…

What about lifestyle factors? The result may possibly be that vegetarians live a healthier lifestyle. Smoke less, exercise more… There are way too many factors in play that make it impossible to say exactly what the direct cause and effect is.

Now, if you’ve decided to go vegetarian for ethical issues, that’s a highly personal decision and an entirely separate discussion. But one thing we can say for sure…

Meat is not bad for you. Look at our caveman ancestors. They didn’t suffer from the health problems that we do today.4 And their diet relied heavily on meat. But not just meat. Fresh, organic meat and fish alongside eggs, tree nuts, and lots of fresh vegetables and fruits.

A study published by the journal Nature provides an answer to this long “which-diet-is-better” debate.5 Researchers studied the tooth enamel from fossils of three different types of early cavemen. They discovered that the group that ate mainly plants died out before the meat eaters.

Bottom line:  If you want a healthy heart, you don’t have to resign yourself to a life of eating lettuce.

It’s not meat that killing us. It’s the junk. So do as our caveman ancestors once did: fresh, organic, and low-glycemic.