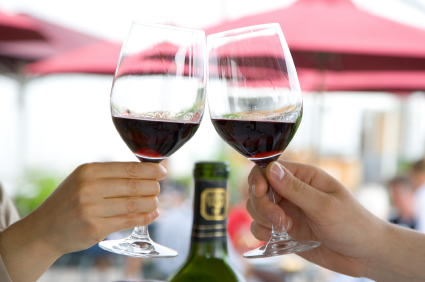 By now, we all know we need “good” bacteria in our gut. But beyond that, most people are clueless about how to maintain a healthy gut balance.

Most believe that eating yogurt will help. Not true. Yogurt doesn’t contain nearly enough probiotics to make a difference. But a new Spanish study sheds light on a surprising way to keep your gut healthy. It’s one most of us will appreciate…

For the study, published by the American Journal of Clinical Nutrition, 10 men consumed red wine for 20 days.1 For another 20 days, men drank a dealcoholized version of red wine. For a third round, men drank three ounces of gin for 20 days.

And that’s where it gets really interesting…

Researchers found that intestinal bacteria shifted in the men while all three beverages were consumed. However, gin showed to have the least effect on intestinal bacteria. But when the men drank both regular red wine and the non-alcoholic version, they had a greater percentage of good gut bacteria.

The red wine showed to be a great source of prebiotics, which act as food for healthy probiotics.

But it wasn’t the alcohol that improved bacteria. Red wine contains polyphenols—plant-based antioxidants found in a variety of foods. The polyphenols in red wine help the body digest food and regulate immune function.

“This study was the first to show that regular, moderate consumption of red wine could have a noteworthy effect on the growth of select gut microbiota,” study researchers said.

A healthy gut leads to less disease and less illness. A study published by the journal Nature studied the correlations between microbiota and health.

Gastroenterologist Llseung Cho, who was not part of the study said, “What we’re only now beginning to realize is that there’s very close interaction between the bacteria within GI tract and human health and disease.”

If you have enough healthy bacteria in your gut, it can knock out the harmful kind. And at the same time it will help your body make vitamins and strengthen your immune system.

Red wine isn’t the only way to develop a healthy gut. But it is a nice relaxing way to. Polyphenols in red wine have also shown to benefit your heart. So you don’t have to feel guilty for indulging every now and then. A daily glass of red wine may be just what the doctor ordered. Or better yet…a way to keep the doctor away. Cheers to a healthy gut.