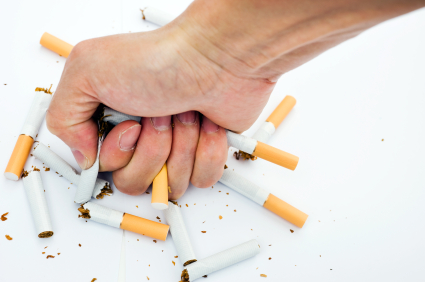 Quitting smoking always tops the list of New Year’s resolutions. And as any smoker – past or present – knows, it’s no easy task. But if you’ve vowed to make 2013 a smoke-free year, a new study may offer some help.

Researchers from the University of Buffalo in New York found that eating more of two types of food helped people smoke less.1 No patch. No gum. No drugs. Just food…

They tracked 1,000 smokers age 25 or older. For the study, the smokers completed surveys about their smoking habits and their intake of these two specific foods.

Researchers found a link between the amount of these two foods consumed and the likelihood that subjects quit smoking and remained smoke free. How much of a link? Smokers who ate the most of these foods were three times more likely to be tobacco free at the 14 month follow up.

And that wasn’t the only positive result. There was also a link between the amount of food consumed and the time people smoked their first cigarette of the day. People who ate the most of these foods waited later in the day to light up, smoked fewer cigarettes, and had a decreased dependence on nicotine.

So what do you need to eat more of to help beat your addiction?

Two food groups that you should already be eating plenty of. And all it took was just four daily servings of fruits and vegetables to see results.

Another study from Duke Medical Center helps explain the link.2 According to the medical center’s study, the taste of foods affects the desire to smoke. Certain foods actually make cigarettes taste worse.

Researchers asked 209 smokers to list items that either worsened or enhanced the flavor of cigarettes.

Among the list of foods that made it worse? 19 percent of people reported milk and cheese, 14 percent said non-caffeinated beverages, such as water or juice worsened the taste. And 16 percent said fruits and vegetable made cigarettes taste worse.

Not surprisingly? Alcohol, caffeine, and meat were among the food and beverages that enhanced the flavor of smoking.

“With a few modifications to their diet…smokers can make quitting a bit easier,” said lead author Dr. Joseph McClernon. “Loading up on fruits and vegetables even before quitting might help cigarettes seem less appealing.”

If you feel a nicotine craving coming on, snack on a piece of fruit or some veggies. It can’t hurt. We don’t have to tell you all the benefits from eating more fruits and vegetables. And we definitely don’t need to tell you the benefits of quitting smoking. You can’t go wrong with this treatment.