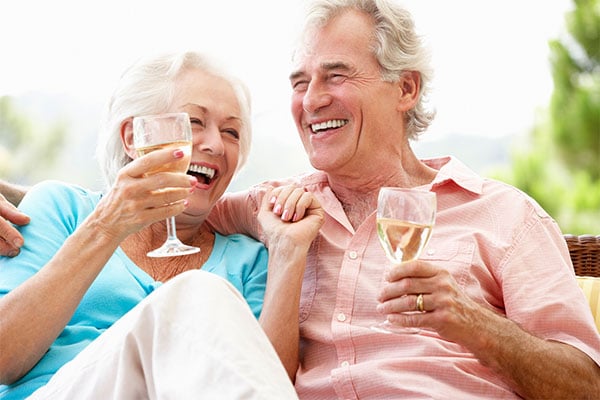 If you enjoy a couple drinks at the end of your day, here’s good news…

Researchers from the University of California have been closely following the health of over 1,600 elderly people since 2003. It’s part of a research effort known as the “90+ Study.” The goal is to determine why some people reach the age of 90 and beyond in good health…and others don’t.

It is one of the largest and most comprehensive studies of aging ever launched.i

As part of the study, researchers perform neurological and cognitive tests on the participants every six months. They also monitor their diet, medical events, medications, and other factors relevant to the subjects’ health.ii

They found that people who drank about two glasses of beer or wine a day are 18% less likely to experience a premature death than non-drinkers.

Dr. Claudia Kawas is a neurologist. She is head of the 90+ Study group. “I have no explanation for it,” she said of the findings. “But I do firmly believe that modest drinking improves longevity.”

3 Other Habits That Help You Live Longer

Dr. Kawas also reported that exercising each day and having a hobby were also important to crossing the 90-year barrier in good health.

Seniors who spent two hours or more a day on a hobby were 21% less likely to pass away prematurely. Those who exercised for at least 15 minutes a day reduced their risk of an early death by 11%.

And drinking two cups of coffee a day lowered death risk by 10% compared to non-coffee drinkers.

“People should try to incorporate as many of these things into their day as possible if they wish to give themselves the best chance of living to a ripe old age,” said Dr. Kawas.iii

The study was presented at the American Association for the Advancement of Science annual conference in Austin, Texas.

Another significant finding was that carrying a few extra pounds doesn’t lower your chances of hitting 90. The study found that being slightly overweight, but not obese, reduces the chances of premature death by 3% compared to people who are either normal or underweight.iv

Which Drink Is Healthiest?

One adult beverage not only can help you reach 90, but it also has other health benefits. Red wine is linked to better brain and heart health, and lower stroke and cancer risk.

A study in Germany found that drinking red wine can even lessen the damage caused by smoking.

The type of red wine highest in procyanidins is Madiran. It’s made in the southwest of France primarily from the tannat grape. Madiran (not to be confused with Madeira, a usually sweet wine) is dry and robust. It is great with steak. It’s somewhat obscure, but most big wine shops carry it.

If you can’t find it, go for cabernet sauvignon. It is also high in healthy procyanidins. It is more widely available.

A general rule of thumb: The darker the wine, the richer it is in procyanidins.v