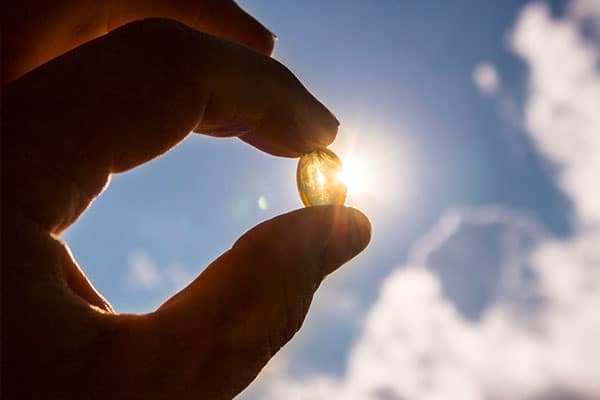 You can cut your risk of type 2 diabetes by 80% by taking one common vitamin.

That’s the important finding of a groundbreaking study conducted jointly by the University of California San Diego School of Medicine and Seoul National University in South Korea.

It showed that your diabetes risk is closely linked to how much vitamin D you have in your body.

About 27 million U.S. adults have type 2 diabetes. Another 80 million have prediabetes. This means they are on their way to getting full-blown diabetes. At the same time, studies have shown that 75% of Americans are deficient in vitamin D.i

Researchers wanted to explore whether the two epidemics—diabetes and vitamin D deficiency—were related. To do this, they followed 903 healthy adults for 12 years. At the start of the study, none of the subjects had diabetes or prediabetes.ii

The participants completed questionnaires on the medications they were taking, tobacco and alcohol use, exercise, and any history of heart disease. They also provided blood samples that were tested for levels of vitamin D.

The researchers defined healthy levels of vitamin D as a minimum of 30 nanograms per milliliter (ng/ml).

Blood samples were then collected from the subjects every two years. Besides vitamin D, they were tested for blood sugar levels and glucose tolerance. Both are markers for insulin resistance and diabetes.iii

Dr. Sue Park is a professor with the Department of Preventive Medicine at Seoul National University. She was the lead author of the study.

In other words, participants with high levels of vitamin D lowered their chances of getting type 2 diabetes by 80%.

The researchers found that for every 10 ng/ml increase above 30 ng/ml there was a 36% reduction in risk.v

The research team also found that those with D levels below 30 ng/ml had a 500% greater diabetes risk than people with levels above 50 ng/ml.

The study was published in the journal PlosONE.

Vitamin D deficiency can lead to other serious conditions beside diabetes. Other studies link it to heart disease, hormone disorders, Parkinson’s, Alzheimer’s, and bone fractures.

The National Institute of Health recommends a 600 IU daily dose of vitamin D for everybody under 70. It recommends 800 IUs for people over 70.

But the scientists who performed the diabetes study say those doses are far too low. To reach vitamin D levels of 30 ng/ml, the researchers suggest 3,000 to 5,000 IUs a day.

They added that if you get 15 to 20 minutes of sun around noontime with your arms and legs exposed, you can get by with a lower dose. The sun causes your body to produce vitamin D.vi

The best way to determine how much vitamin D you need is get a blood test. It’s a simple blood draw that your doctor can do. It’s called a 25 (OH) D test.

If you test low, consider taking a supplement. But be sure to choose the right kind.

Vitamin D is widely available in two forms—D2 and D3. Make sure that you take the D3 form. It’s more than twice as effective at raising your vitamin D levels.

A recent British study found that subjects given a D3 supplement raised their D blood levels by 75%. Those given D2 had increases of only 34%.

If a supplement is simply labeled “vitamin D,” chances are it is D2, which is less expensive to produce.

If you have diabetes or are prediabetic, taking vitamin D could be an important step to improve your health.

Editor’s Note: If you’re concerned about your blood sugar level, you should know that some mainstream diabetes treatments can actually make the condition worse. To find out more, read our monthly journal Independent Healing. It’s your best source for evidence-based health advice. Go HERE to find out more.