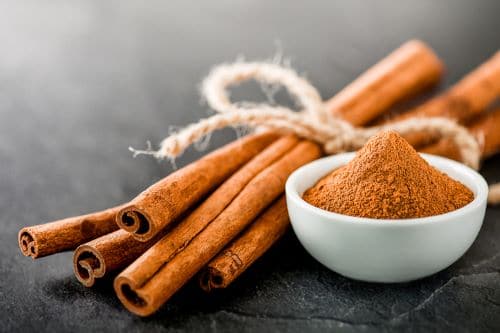 America is heading toward a diabetes disaster.

Nearly 90 million people in the U.S. have prediabetes. Don’t let the “pre” fool you.

Prediabetes is a serious condition. It means that your blood sugar levels are elevated and heading toward full-blown diabetes and all the health problems that it entails…nerve damage, kidney disease, vision loss, heart disease, strokes, and more.[1]

Along with all those issues, diabetics often die early. The disease  shortens lifespan by about 10 years.[2]

But this grim prognosis is not inevitable. New research shows that one natural solution can improve blood sugar control and may be able to stop prediabetes from progressing.

A study published in the Journal of the Endocrine Society tested cinnamon in prediabetes patients. Researchers gave half the subjects 500-mg cinnamon supplements three times a day. The other half took a placebo.[3]

After 12 weeks, the cinnamon group had lower blood glucose. And their blood sugar did not spike as much after they ate carbohydrates. The placebo takers, meanwhile, had higher fasting blood glucose levels.

Dr. Giulio Romeo was one of the study authors. “We are looking for safe, durable, and cost-effective approaches to reduce the progression from prediabetes to type 2 diabetes,” he said.[4]

“Our 12-week study showed beneficial effects of adding cinnamon to the diet on keeping blood sugar levels stable in participants with prediabetes.”

The findings support a previous study published in the American Journal of Clinical Nutrition. It found that people who consume 1½ teaspoons of the spice a day lowered their insulin levels. Subjects lost an average of two pounds a month without changing their diet or exercise habits.[5]

It’s important that you choose the right kind of cinnamon. Cinnamon is typically grouped into two different types: Cassia and Ceylon.[6]

Cassia cinnamon can be derived from the bark of several different species of Cinnamomum trees. It’s the most common type and what you’ll find in the spice aisles of grocery stores.

Ceylon cinnamon, or true cinnamon, is specifically derived from the bark of the Cinnamomum verum tree. It’s more expensive and less common than Cassia. But it contains more antioxidants and is more bioactive.

Cassia cinnamon has another shortcoming. It’s high in a potentially harmful substance called coumarin. Several studies have found that coumarin is toxic to the liver.[7]

A 165-pound person reaches the safe limit for coumarin after eating only about half a teaspoon of Cassia cinnamon. A therapeutic dose is about three times higher than that. Therefore, you should never take more than a half teaspoon a day of Cassia cinnamon.

Ceylon cinnamon contains only trace amounts of coumarin. So there are no toxicity dangers.

You can buy Ceylon cinnamon powder online or in specialty spice stores. Take up to 1½ teaspoons a day. Many people like to add it to coffee, oatmeal, smoothies, or yogurt.

You can also buy Ceylon cinnamon in supplement form. We recommend a dose of two grams a day with meals.

Cinnamon is a natural way to make sure you’re not a victim of America’s impending diabetes epidemic.

Editor’s Note: If you’re concerned about sugar intake, you should know that some mainstream diabetes treatments can actually make the condition worse. To find out more, read Independent Healing, your best source for evidence-based health advice. Go HERE to subscribe.