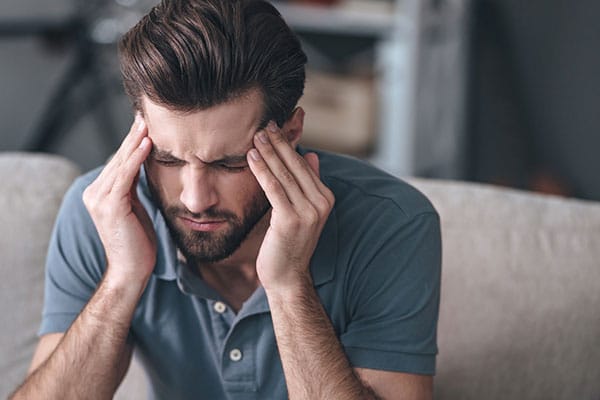 Nerivio is a noninvasive, FDA-approved device that you strap onto your arm after a migraine starts. It looks similar to a blood pressure cuff.

You turn it on using a smartphone app. It sends electric pulses through your arm that engage the trigeminal nerve in your head. This alleviates the pain. The treatment takes about 45 minutes.

In a clinical trial, Nerivio was tested against the standard drug treatments for migraines. They include over-the-counter pain relievers such as ibuprofen and acetaminophen, and triptan medications such as sumatriptan, eletriptan, and zolmitriptan.

Two hours after using Nerivio, 37% of subjects were pain-free. Only 9% of subjects taking medications had no pain. Pain was reduced in 71% of the Nerivio subjects versus 57% of those taking drugs.i

The study found that Nerivio had no side effects. But patients who take triptans often report drowsiness, fatigue, and difficulty concentrating.

While using Nerivio, people can continue their normal activities. However, the device is not waterproof, so they can’t swim or shower with it.

Migraines are the third most prevalent illness in the world. Eighteen percent of American women, 6% of men, and 10% of children suffer from them.ii

For Tom Picerno, Nerivio was a game-changer. He has suffered from migraines for more than 30 years. Medications helped. But there were days when the pain was still so bad that he couldn’t get out of bed. His neurologist suggested he try Nerivio.iii iv

Soon after he received the device, Tom was hit with a bad migraine. “It was quickly ramping up to be a real skull crusher,” he said.

He put the device on his arm and turned it on. Tom said the electric pulses caused barely noticeable spasms in his bicep. But he had no other discomfort.

And although his migraine didn’t totally go away, it was so mild that he didn’t feel he needed to take any medications. “I consider that to be a huge win for me,” he said.v

Earlier this year, the FDA approved Nerivio for use in patients 12 and older. It should not be used by people with congestive heart failure, severe heart disease, or uncontrolled epilepsy. It can also interfere with implanted medical devices such as pacemakers.vi

You need a prescription to get the device, which you can get from your doctor or through an online consultation. Nerivio costs about $100, but it is covered by most insurance plans. To find out more, go HERE.

The Migraine Solution That’s Already In Your Medicine Cabinet

One Type of Exercise Stops Migraines