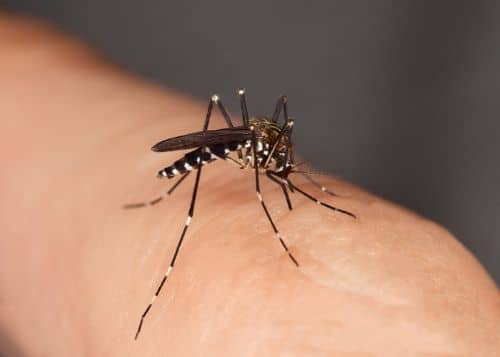 We’ve all been warned that we shouldn’t scratch bug bites because it can lead to infections. And you probably know from personal experience that scratching actually makes them itch even more.[1]

But in the moment, scratching feels so good. It’s hard to resist.

New research has found a way to get the satisfying feeling of scratching without increasing the itch or risking an infection.

The study was published in the Journal of Neuroscience. Researchers injected mice with a chemical that made them itchy. They monitored the animals’ brain cells to see how they responded to the itchiness.[2]

They found something surprising…

It wasn’t scratching that best relieved the itchy feeling, it was gentle rubbing.

The scientists concluded that rubbing activates an anti-itch pathway in the spinal cord. Unlike scratching with fingernails, rubbing works without increasing itching later or causing infection.

The study shows you can get the immediate gratification of scratching without the downside by gently rubbing bug bites using the tips of your fingers—not your nails.

Don’t try to prevent insect bites by dousing yourself with DEET-based mosquito repellents. DEET (N,N-Diethyl-meta-toluamide) is the primary chemical in many commercial sprays and lotions.

But using it is like coating your body in toxins.

This chemical has been linked to memory loss, headaches, weakness, fatigue, muscle and joint pain, tremors, and breathing difficulties. It’s so corrosive that it will eat right through plastic and fabrics made of spandex and rayon. It even dissolves watch crystals and nail polish.

DEET is widely seen as the most effective mosquito repellent on the market. But there is a new alternative that just became available. It’s called nootkatone (pronounced NEWT-kah-tone).

It’s a natural oil found in grapefruit and cedar trees. Unlike DEET, which smells awful, the new repellent has a pleasant citrus scent.

Not only have tests found it to be more effective than DEET, it is so safe that you can eat it.

“If you drink Fresca or Squirt, you’ve drunk nootkatone,” said Ben Beard. He’s a disease expert at the Centers for Disease Control and Prevention, which helped develop nootkatone.[3]

Besides use as a mosquito and flea repellent, experts say nootkatone has great potential as an insecticidal soap. It could be used by people who live in tick-infested areas. Bathing with it would cause ticks to drop off.

It’s also superior to other natural repellents such as peppermint oil, citronella, and lemon grass oil. They lose their potency after about an hour. But nootkatone lasts as long as DEET and other synthetics.

Nootkatone products are just starting to go on sale. They can be hard to find. But over the next year, nootkatone may replace DEET as the first-line defense against these and other pests. One brand available now is Mozzi Magic. Others will soon follow.

In the meantime, here are other ways you can keep mosquitos at bay naturally.

If you want to ward off biting bugs, use a natural option. But if you do get bit, remember to rub, not scratch.

What the CDC Isn’t Telling You About Zika