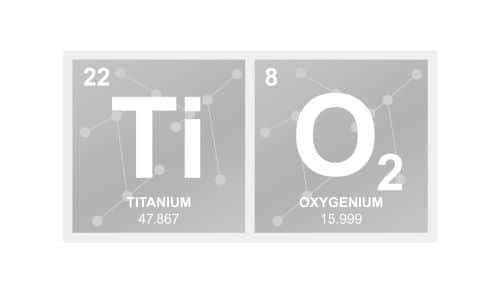 Titanium dioxide is all over your supermarket.

For years, this food whitening agent and preservative has been linked to digestive problems. Researchers have found that it destroys digestive enzymes and increases intestinal inflammation.[1]

The evidence is so strong that earlier this year France banned titanium dioxide from food. But it’s still perfectly legal in the U.S.[2]

Researchers at the University of Massachusetts Amherst fed the chemical to two groups of mice. One was obese. The other was normal weight. In both groups, titanium oxide damaged digestion.

The additive altered the microbiome, the “good” bacteria in the gut that contributed to good digestive and overall health.

They dosed human subjects’ intestinal cells with the equivalent of one meal’s worth of titanium dioxide. They did this three times over five days.

The additive diminished the ability of cells to absorb nutrients. The intestinal barrier was weakened, metabolism slowed, and crucial nutrients—such as iron, zinc, and omega-3 fatty acids—became difficult to absorb.

The researchers found that titanium dioxide damages cell structures in the gut called microvilli. These are tiny projections that absorb nutrients while providing a barrier against germs. Subjects’ microvilli were sparser after being exposed to only three meals’ worth of titanium dioxide.[5]

Dr. Gretchen Mahler was a co-author of the study. She said it is clear that titanium dioxide “alters intestinal function.”

At least two other studies have also found that titanium dioxide damages digestion:

Titanium dioxide was first used in American foods in the 1960s. With the rise of processed foods, it is now more prevalent than ever.

A 2012 study at Arizona State University tested 89 off-the-shelf food products that were white…foods like mayonnaise, Twinkies (the filling is white), chewing gum, and frosting. Every single white-colored product tested positive for titanium dioxide.[9]

Because of health concerns, Dunkin’ Donuts has voluntarily stopped using titanium dioxide to color its doughnuts. The European Union is now considering following France’s example and banning it from the rest of the continent.[10]

But in the U.S., the chemical remains in widespread use. Dr. Mahler says reducing your exposure can restore normal digestion. But that’s easier said than done.

The FDA allows American food makers to hide titanium dioxide on ingredient labels by using misleading names. Food companies hide it by listing it as:[11]

Editor’s Note: Discover the real reason more of us than ever are suffering from chronic stomach troubles… and the simple solution to acid reflux, irritable bowel syndrome, celiac, gluten intolerance, and more. Get Independent Healing, the monthly health journal that brings you science-based medical solutions you won’t find anywhere else. Find out more HERE.

Related Articles
These Deadly Food Additives Can Cause Cancer
The Hidden Cause of Your Stomach Troubles
Feeling Anxious? It Might Be Something You Ate