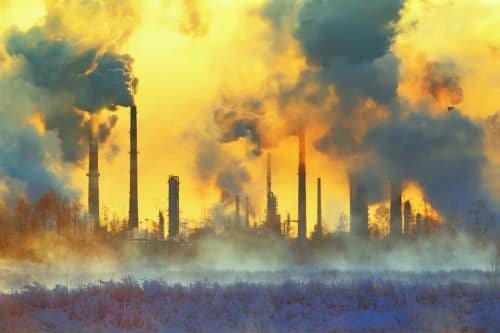 Air pollution is an underrated killer.

Most of us don’t think of it as a major threat to our health. But it’s linked to heart disease, cancer, strokes, cognitive problems, lung disease, and diabetes.

It’s responsible for 107,000 American deaths a year, according to a University of Minnesota study. That’s more people than die in car accidents.[1]

Another recent study found that even if you’ve never lit a cigarette in your life, your lungs may be as badly damaged as someone who has smoked a pack a day for 29 years if you live in one of six major U.S. cities with badly polluted air.

A U.K. study found that people living where the air is dirty have a 40% risk of dementia compared to those breathing clean air.

You may think there’s not much you can do about it, short of moving. But a new study may have found an answer.

The scientists gave the women brain scans and tested for omega-3 fatty acids in their blood. Omega-3s are abundant in fish.

They also calculated the amount of air pollution the women were exposed to.

The researchers found that omega-3s seemed to protect subjects from the brain damage caused by air pollution.

The study used only female subjects. But there’s no reason to think the results wouldn’t apply to men as well.

Dr. Ka He was the study author. He said that omega-3 fatty acids “have been shown to fight inflammation and maintain structure in aging brains.[3]

“They have also been found to reduce brain damage caused by neurotoxins like lead and mercury. So we explored if omega-3 fatty acids have a protective effect against another neurotoxin, the fine particulate matter found in air pollution.”

Dr. He pointed out that fish “are an excellent source of omega-3 fatty acids.”

He said the findings suggest that higher levels of omega-3 fatty acids in the blood from fish consumption “may preserve brain volume” as you age and “possibly protect against the potential toxic effects of air pollution.”

The Best and Worst Fish

The study authors suggest you eat one to two servings a week of baked or broiled fish to get the brain-protective effects of omega-3s. But some types of fish may do more harm than good to your health.

Other fish to avoid due to mercury content are king mackerel, orange roughy, shark, and tilefish. And steer clear of farmed eel. It often contains both carcinogens and mercury.

Catching fish in local waters guarantees freshness—not that it will be free of contaminants. Rivers and lakes are often loaded with pollutants. Heed local advisories about mercury and other contaminants before eating fish you or someone you know catches.

The best fish to eat are those low in mercury and other chemicals, but high in healthy omega-3 fatty acids.

If you don’t like fish, a fish oil supplement can give you the omega-3s you need.

Look for brands that contain the triglyceride form of fish oil. This should be noted on the label. A high-quality fish oil will also be relatively free of any fishy tastes or smells. The oil should be nearly translucent and not cloudy.

You’re more likely to find quality fish oil at health food stores and online than at drug stores and supermarkets.

According to the European Food Safety Authority, omega-3 supplements can be safely consumed at doses up to 5,000 mg daily.

But if you’re on a blood-thinning medication, check with your doctor before taking fish oil.[6]