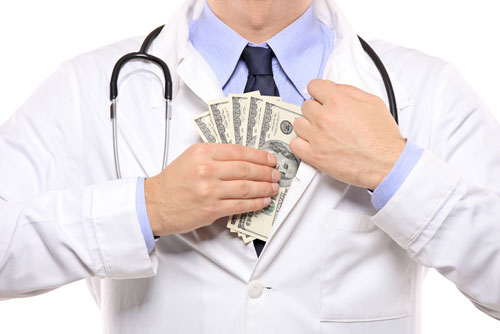 In 1995, OxyContin was approved by the FDA. It was marketed as a safer pain pill by its manufacturer, Purdue Pharma.[1]

No one knew it at the time, but it was the start of perhaps the biggest public health disaster in American history.

An average of 130 Americans now die each day from opioids.

You have to wonder how this could happen.

Yes, the drug companies bear much of the blame. They are often driven by profits, not caring about the human cost.

But new research shows that Big Pharma had accomplices: Thousands of doctors.

The study appeared in the Journal of General Internal Medicine. Researchers looked at gifts from drug companies to doctors related to opioid promotion.

By law, pharmaceutical companies have to report the dollar value of gifts they give to doctors. That can include travel, lodging, meals, consulting fees, and other payments.

The researchers then compared the gifts to how often physicians’ prescribed opioids.

They found that doctors who got opioid-related gifts were far more likely to prescribe the painkillers to their patients.

When primary care doctors took $100 or more in gifts, they were 3 1/2 times more likely to be a frequent opioid prescriber than doctors who took no gifts.

Psychiatrists and neurologists were even worse. When they took $100 or more, they were 13 times more likely to be frequent opioid prescribers.

The biggest givers were Insys and Purdue. These drug companies together were responsible for almost two-thirds of all opioid gifts. Both companies have settled opioid lawsuits for hundreds of millions of dollars.

Doctoral student Mara Hollander was the study’s lead author. She said that for every 100 Americans, “there were 58 opioid prescriptions written in 2017…that is a tremendous amount of prescribing in a country that is struggling with an opioid epidemic.”[4]

It’s important to do your homework.

Go to the Dollars for Docs website. It’s run by the nonprofit investigative journalism group ProPublica. Type in your doctor’s name and the state in which he or she practices.

You’ll instantly see if they’re getting Big Pharma gifts. It will tell you exactly how much your doctor has been paid and where payments came from.

The last thing you should be worried about is whether your doctor is choosing the best medication for your health…or the one that will bring a fat check from Big Pharma.

Big Pharma Is Destroying Your Microbiome