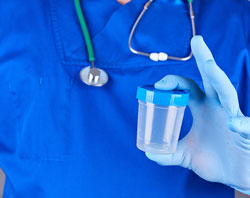 It’s time to tell your doctor you don’t want that last thing.

A recent study in 46 Michigan hospitals found that, of 2,733 seniors who tested positive for UTI bacteria, almost 83% received a full course of antibiotics even though they had no symptoms.[1]

The United States Preventive Services Task Force is an independent panel of experts. They review medical evidence and provide guidance on screenings and prevention.

The task force found that, aside from pregnant women, there’s no benefit in treating people for UTI bacteria that aren’t causing illness.

Treatment can be harmful. Especially to older folks.

The study found that hospital patients treated for asymptomatic UTI bacteria didn’t do any better than patients who weren’t treated. In fact, they had to stay in the hospital a day longer on average.

A recent editorial in the Journal of the American Medical Association called for an end to routine urine tests. We agree.[3]

If your doctor wants to give you a urine test. Ask why. If he or she says it’s to check for a urinary tract infection and you don’t have any symptoms, decline the test. Bring along this article to help explain why.

Doctors should run tests for a good reason, not because it’s simply the routine thing to do…especially when the resulting treatment could harm rather than help you.

Editor’s Note: Ever wonder why some people seem to catch every bug that’s going around and others never get sick? Discover how to make your immune system so powerful that you won’t ever have to worry about getting colds and the flu. Read Independent Healing, your best source for unbiased, science-backed health solutions. Go HERE to subscribe.

These Antibiotics May Raise Your Colorectal Cancer Risk