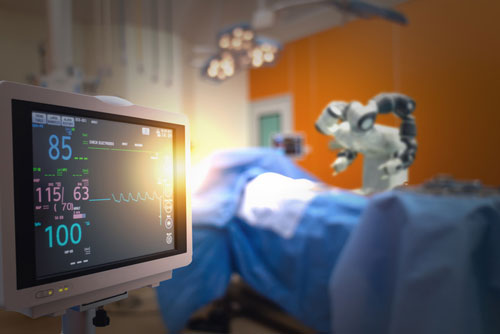 When robotic surgery first became popular a few years ago, it seemed like an idea whose time had come.

Robotics promised to take human error out of the equation.

Robots never have shaky hands. They are more precise than a human can be.  They can operate in tiny spaces too small for a surgeon to reach.

And they make traditional surgeons look archaic. A robotic surgeon looks a bit like a Star Wars droid. Three of its arms hold instruments. A fourth holds a camera.

These machines have been heavily marketed and have become common for prostatectomies, hysterectomies, colon surgeries, and other procedures.

But they were never approved for any cancer-related treatment… which hasn’t stopped doctors from commonly using them for that very purpose.

And recent studies have revealed a problem… Robotic surgery is generally no better than regular surgery, and for some procedures, it has far worse outcomes.

In robotic surgery, a surgeon manipulates the robot’s controls through a computer. He watches a magnified image of the operation through a monitor as he works.

The Food and Drug Administration recently warned there’s no evidence that cancer patients who go under a scalpel wielded by a robot have better survival rates.

And the data show that cervical cancer patients have worse survival rates.

The F.D.A. cited two studies from The New England Journal of Medicine. One was a clinical trial of cervical cancer patients. The results for robotic surgery were so bad that the study was stopped early. Women who had robotic hysterectomies had four times as many cancer recurrences. And they died six times as frequently.[i]

Dr. Pedro T. Ramirez was lead author of the study. He said the findings were striking because hysterectomy usually cures cervical cancer.

Researchers found that 5.3% of patients who had regular surgery were dead after four years.

But almost double that number, 9.1%, of the robotic surgery patients died.

Even so, many surgeons are reluctant to give up robots. Dr. Ramirez said it may be hard for doctors to admit the robots don’t work after investing a lot of time being trained to use them and huge amounts of money in buying them.

“It’s not about how much time you devoted to your training, or your ego,” he said. “It’s an issue of cancer. And having a high likelihood of cancer coming back if you have surgery through this approach.”[iii]

3 Steps to Finding the Best Surgeon

Don’t let your doctor talk you into a robotic procedure. Instead, find the best human surgeon you can.

You can find a lot of important information online. Scrutinize a potential surgeon by following this procedure:

Editor’s Note: If you’re worried about cancer, you need to know the Cancer Kill Code. It was recently discovered by researchers at Northwestern University. And it makes cancer commit suicide.

Get all the details by reading Independent Healing, your best source of unbiased, research-based health solutions. Subscribe by going HERE.