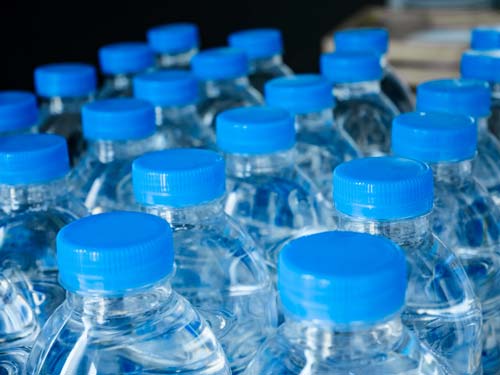 With all the headlines about contaminated tap water, many of us think we’re doing our health a favor by drinking bottled water.

But a new study shows that there’s a contaminant in bottled water that might be worse than anything that comes out of your faucet.1

Researchers at State University of New York analyzed 259 bottles of water bought in nine different countries. They added a dye called Nile Red to each bottle. The dye sticks to free-floating pieces of plastic. It turns fluorescent under certain wavelengths of light.

Using this technique, the scientists could see how many tiny plastic particles were in each sample, even though they are invisible to the naked eye.

‘We Found It in Bottle After Bottle…’

Dr. Sherri Mason is a leading microplastic researcher. She led the analysis. Her team counted every piece of plastic. The biggest ones were about 100 microns. That’s roughly the diameter of a human hair. Most of the particles were much smaller.

The scientists discovered an average of more than 300 plastic particles per liter of bottled water. 2

But the levels varied widely. One bottle of Nestle Pure Life had a concentration of 10,000 particles per liter. Only 17 of 259 bottles tested were free of plastic.3

The main types of plastics found were polypropylene, nylon, and polyethylene terephthalate.

“We found [plastic] in bottle after bottle and brand after brand,” Dr. Mason said. “Plastic has become such a pervasive material in our society, and it’s pervading water.”

The researchers also tested unfiltered tap water. They found that it has about half as many plastic particles as bottled water.

Microplastics detection is an emerging field. Up until recently, there was no way to check for plastic particles in water. So there’s currently no regulations requiring bottled water companies to filter them out.

Where does the plastic come from? And what is it doing to us?

The study showed polypropylene made up 54% of the larger particles. This is the type of plastic used to make bottle caps. So scientists speculate that caps may shed plastic into the bottles.

Other plastics may come from plastic contamination of water sources.4

Researchers have no idea what all this plastic is doing to us. The United Nations Food and Agriculture Organization says that about 10% of the particles in water can enter your lymphatic system or make it into the bloodstream and your kidneys and liver. But it’s unclear what the effect is.

Some researchers blame plastic contamination for a mysterious drop in men’s sperm counts in recent years.6

The World Health Organization has just launched a research effort to examine the health effects of plastic particles. But until it’s complete, we won’t know the dangers we’re facing.7

In meantime, the best defense is to avoid bottled water and drink filtered tap water instead.8

The least expensive option are carbon filters. They fit atop a pitcher or connect to kitchen taps or refrigerator dispensers. Carbon filtration removes most microplastics, but not those smaller than 5 microns.

The most effective filters use reverse osmosis. They remove virtually all plastic particles. They cost around $200 for an under-sink model.9

Water is essential to life. It’s the world’s most important nutrient. You want to make sure yours is as clean as possible.