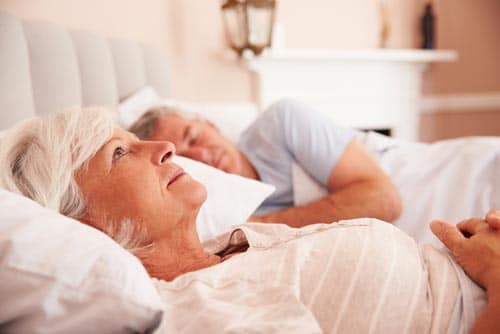 We love our devices at all hours of the day…and night. An astonishing 90% of us spend time with a smart phone, tablet, or TV during the hour before we go to bed.1

Unfortunately, this habit can rob of us of a good night’s sleep. That’s because LED-based devices flood our eyes with blue light. This increases alertness while suppressing the sleep-inducing hormone melatonin.

More than four in 10 Americans report that at least once in the last week they were tired during the day because of a bad night’s sleep.2

Researchers from Columbia University Medical Center recognized that Americans won’t give up their devices at night…even if it leads to insomnia.

So they looked for another solution.

They theorized that amber-tinted glasses might work. They block blue light.

The scientists studied 14 insomniacs. They divided them into two groups. Half the participants wore wrap-around glasses with amber-tinted lenses for two hours before bedtime. The other half wore clear placebo lenses. They did this for a week. A month later, participants repeated the protocol with the other set of glasses.3

The researchers found that subjects got around 30 minutes extra sleep on the days they wore the amber lenses. And they reported their sleep was sounder.

The study also found that participants’ blood pressure was lower when they used the amber glasses.

Dr. Ari Shechter led the study. It was published in the January 2018 issue of the Journal of Psychiatric Research.

“Now more than ever we are exposing ourselves to high amounts of blue light before bedtime, which may exacerbate sleep problems,” Dr. Shechter said. “Amber lenses are affordable and they can easily be combined with other established cognitive and behavioral techniques for insomnia management.”

Is Blue Light Wrecking Your Sleep?

Other recent studies confirm the benefits of blocking blue light at night. Researchers at the University of Houston College of Optometry instructed 22 participants to wear blue light-blocking glasses for three hours before bedtime for two weeks.

The researchers found that participants had a 58% increase in nighttime melatonin levels. This jump is even greater than if they had taken a melatonin supplement.4

The subjects also reported sleeping better and falling asleep faster. They increased their sleep duration by 24 minutes a night.

Many different blue light-blocking glasses are available at stores or online. They cost anywhere from $10-70.

Consumer Reports magazine recently found that one brand worked best. It’s called Uvex Skyper. It cut out virtually all blue light. Some other brands blocked only about a third of it.5

There are other ways besides amber lenses to reduce blue light exposure. Many smartphones, tablets, and laptops have lighting adjustments that allow you to switch from blue to amber tint at night. It also helps to reduce the brightness.

If you can’t use your screen settings to reduce blue light, you can do it with a free app called f.lux.

And make sure your bedroom is as dark as possible. If you have a bedside clock, put it on the dimmest setting. And if it is white or blue tinted, switch to one that is a different color.