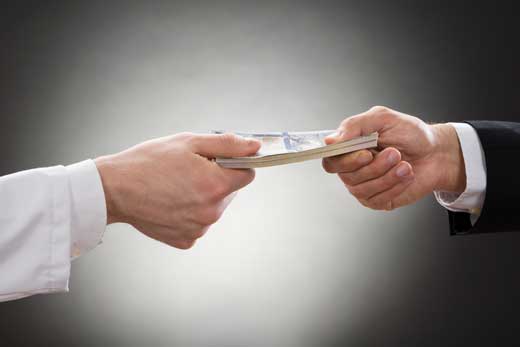 The government has finally taken the first step to stop Big Pharma from corrupting our doctors.

For decades, drug companies have given billions of dollars in bribes to doctors as part of a legal marketing scheme to get them to prescribe pricey brand name drugs over cheaper generics. And it worked.

Study after study has found that doctors who receive cash, gifts, trips, and meals from Big Pharma are up to three times more likely to prescribe their drugs.

In 2014, Big Pharma greased the palms of California doctors to the tune of $1.4 billion. That’s more than in any other state.

Pharmaceutical firms now fork out more in doctor payments than they do for research and development for new drugs.3

Charlie Ornstein is senior editor for the non-profit newsroom ProPublica, a consumer watchdog organization. He has been tracking Big Pharma’s payments to doctors for the past few years.

He noted that Big Pharma has learned to game the system. “It’s illegal to give kickbacks to a doctor to prescribe drugs, but it is legal to give money to doctors to help promote your drug. Some doctors make tens of thousands or hundreds of thousands of dollars a year beyond their normal practice just for working with the industry.”4

The California bill is expected to pass the full state Assembly and be signed into law despite fierce opposition from the state’s medical establishment.

The California Medical Association (CMA) fought tooth and nail to kill the bill. And it’s no mystery why.

Big Pharma paid the CMA president’s medical practice $1.6 million between August 2013 and December 2015. And it doled out up to $865,000 to another five doctors on the CMA’s board of trustees.

Big Pharma is so well financed that it normally doesn’t lose battles like the one in California. That’s why their defeat is such a positive sign. But it’s only one state. We need the other 49 to follow.

Maine has already begun the fight. A bill capping gifts to doctors is in the works. From 2014 to 2015, payments to Maine doctors from drug companies selling opioids doubled. The results were predictable…  Deaths from opioid overdoses increased 40% in Maine.7

Until Big Pharma bribes are outlawed in your state, there’s one thing you can do to protect yourself. Check to see if your doctor is on the take.

ProPublica tracks the payments. Simply go to the site and type in your doctor’s name and the state in which he or she practices.

The last thing you should be worried about it is whether your doctor is choosing the best medication for your health…or the one that will bring a fat check from Big Pharma.