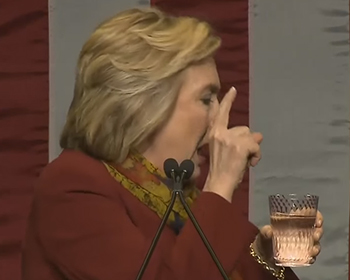 Hillary Clinton’s uncontrollable coughing fits are making headlines across America. Her awkward episodes of nasty hacking sometimes last for minutes while she gives speeches. And they’ve sparked speculation that she has a serious health problem.1

Her medical records provide clues to the cause. They show she is taking:2

We researched the side effects of all of these. What we discovered was surprising. Many people who take one of them complain of an awful dry cough… exactly like the type Hillary has. People over 60 are especially susceptible. Hillary is 68.

Hillary’s doctors may not even realize this medication is causing her problem. That’s because the FDA does not require coughing to be listed as a side effect.

Amazingly, the drug is in rat poison.3,4 Yes, the possible next president of the United States is taking a substance used to kill rats.

Coumadin is the brand name for warfarin. It’s an anti-coagulant (blood thinner). Coughing is so common among its users that support groups have popped up online.5

One website that tracks drug side effects found 1,751 Coumadin users have reported having trouble with a cough.

Hillary started taking Coumadin after she fell and hit her head in 2012. Doctors found a blood clot in her brain. She began taking the blood thinner to dissolve the clot. She has continued on it to avoid a recurrence.

These same anti–clotting properties cause rodents to die from internal hemorrhaging after eating it. This makes it a potent rat poison.6

Coughing can be among the least of the side effects in humans. Just like it does in rats, Coumadin can cause serious internal bleeding. It can be deadly.7

In fact, The New England Journal of Medicine reported that the most common cause of emergency room visits by the elderly are the side effects of prescription blood thinners.8 Other serious problems include stomach ulcers and kidney failure.

Who would want to take this stuff if they didn’t have to? Some patients may be candidates to try less risky alternatives. Here are six natural substances that thin the blood without side effects:9,10

Before stopping any medication, including Coumadin, talk to your doctor first. Ask if you can try a natural blood thinner in its place.

By working carefully with your physician, you may be able to reduce—or even eliminate—your use of Coumadin or other prescription blood thinners.