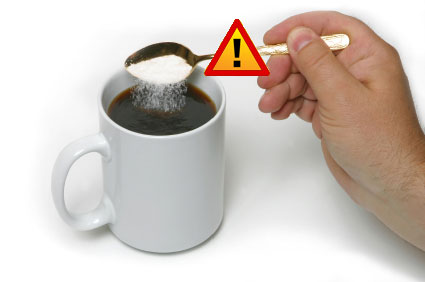 You know how dangerous diet sodas are. That’s what makes what we’re about to tell you all that much more disturbing…

Artificial sweeteners can cause a wide range of health problems. This includes a 48 percent increase in risk for heart disease. There’s also a link to unexpected disorders like depression.

Thankfully, people are finally catching on. Sales are down by about 7 percent.1 That makes the timing of this news so perfect for the beverage giants.

According to the European Food Safety Authority (EFSA), this ingredient has always been safe. Never mind the evidence showing how harmful this stuff actually is!

But they claim that they have been looking into its safety since 2002. And now, after their first-ever “full risk assessment” of this substance, they are more convinced than ever that it’s safe.2 Too bad it’s total nonsense.

The fact is that the EFSA isn’t putting safety first.

Don’t be fooled by their flawed findings. Aspartame is never truly safe for you to consume.

Yet the EFSA continues to say that it is totally safe to consume 40 mg per kg of bodyweight.3

But see how your body feels after drinking just one of those.

It’s no surprise that the data they looked at included the 112 studies from the 1980s when the beverage industry was trying to get aspartame approved for use. After all, 100 percent of industry studies find aspartame to be safe. But 92 percent of independent studies find risks associated with consuming it.4 Wake up EFSA and consider the source!

Aspartame is the artificial sweetener of choice in most diet sodas. It’s what makes drinking them so dangerous to your health. And these sodas may be the single biggest source of aspartame for most people.

One study of nearly 60,000 women shows that drinking four or more diet sodas a day during pregnancy increases risk of premature birth by 80 percent. And nearly 40 percent of women who drank just two of these aspartame-sweetened drinks a day had a 40 percent increase in risk. Even more shocking is that this study was even funded by the European Union.5

After 22 years, researchers in a different study found that men who drink diet sodas containing aspartame are over 30 percent more likely to develop non-Hodgkin’s lymphoma.6

Yet another study found that drinking more than two diet sodas per day can decrease kidney function in women by up to 30 percent in 11 years.7

Even if the EFSA wants to sweep these studies under the rug, there’s no denying that aspartame is converted by the body into formaldehyde. Yes, the same formaldehyde used to preserve dead bodies. This substance is a known carcinogen that can cause kidney damage and birth defects.8

Here in the US it’s worse. The FDA recognizes even more aspartame per day to be safe.9

Simply put, aspartame is dangerous stuff. And it’s hard to avoid. You can find it in diet sodas of course. But you can also find it in yogurt, chewing gum, breakfast cereal, and just about anything claiming to be sugar-free.10

Even more disturbing is that aspartame may be showing up in milk pretty soon. And if Big Dairy gets its way, you won’t even know about it. They won’t have to put it on the label.

Drinking any soda is never a good idea. Don’t try to find a diet soda that uses Splenda instead of aspartame. Your best bet is to avoid preservatives and artificial additives altogether. Stick with water instead.

The EFSA says aspartame is safe. But don’t let that fool you. The research doesn’t lie.