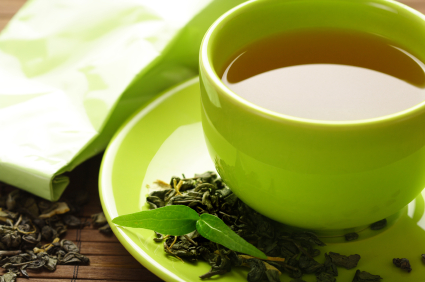 Tea has about 8 to 10 times the amount of antioxidants found in fruits and vegetables.1

That makes it a radical cancer-fighter no matter which kind you drink—black, green, white, or oolong (a blend of black and green tea).

There is one type that stands out above the rest though. But only if it’s made a certain way.

It’s the kind they drink in China and Japan. It’s not a surprise those countries have much lower rates of cancer than we do here in the U.S.  According to the World Health Organization, prostate and breast cancer rates in Japan are three times lower than the U.S., for example.

Studies over the last decade prove this tea, ounce for ounce, has more vitamin C and antioxidant power than any of its brewed cousins. And the way you drink it makes a huge difference.

This tea cuts off the blood supply to cancer cells so that they stop growing and multiplying.

Researchers tested the power of polyphenols in a group of men diagnosed with prostate cancer. Half of them drank only water each day, while the others drank six cups of green tea.2 The group who drank green tea had much lower levels of prostate specific antigen (PSA).

You’ve probably heard of the polyphenol that’s most widely talked about for its immune-boosting and weight loss power, ECGC. It’s a flavonoid super food that makes up about 15 percent of green tea. Studies show EGCG prevents the growth of new blood vessels in cancerous tumors—up to 70 percent less growth.3 Those are impressive results.

You don’t need to even drink that much to help your body kill cancer cells. Studies show that just two cups a day (300 to 450 mL) is enough to significantly increase the antioxidant concentrations in your body.4

And, there’s a secret to making sure your body absorbs all the antioxidant catechins (KA’-the’kins) found in green tea. Well, it’s maybe not so much a secret as it is a chemistry trick that’s been around for years…

Adding lemon or other citrus juice to green tea increases the amount of catechins your body absorbs. Catechins don’t live very long in non-acidic environments, such as your intestines. Without lemon, you eliminate up to 80 percent of the total antioxidants in that cup of tea.

You can use orange, lime, and grapefruit, but they’re not as powerful as lemon. This classic combination is the best combination you can use to fight free radicals and cancer-causing inflammation.5

But beware! Not all green teas are strong enough to kill cancer cells.

Many supermarket brands only have small amounts of green tea. Many are mixed with sugar and additives, and are so processed they don’t have any antioxidants left. Bottled green teas are usually nothing more than glorified sugar water.

Look for pure, organic green teas. They have the highest amount of antioxidants.

We all know how important it is to try to prevent and treat cancer the natural way. So does your doctor. According to one report, when a leading doctor at the Sloan‐Kettering Cancer Center found out that he had advanced‐stage cancer, he told his colleagues, “Do anything you want—but no chemotherapy!”

Not surprising. Doctor’s know better than anyone how devastating chemo can be. So why aren’t more doctors using THIS alternative, Nobel Prize winner-studied, natural treatment instead? A study on people who received it for cancer and other ailments noted that “the results have been spectacular; the only side effect is ‘chronic good health.’”