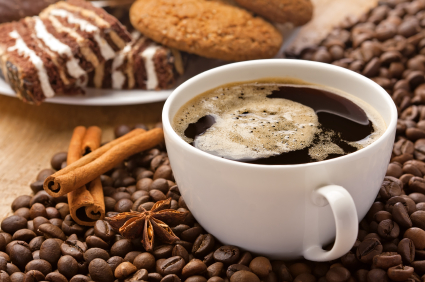 The evidence keeps piling up.

The drink most health “experts” warn you to stay away from is actually a proven cancer-fighter.

Researchers know the drink can lower your risk of developing certain cancers including prostate cancer. In 2011, a Harvard study found that men who drink 1-3 cups daily reduce their risk by 30 percent. Not only that…

The popular drink has protective effects even if you’ve already been diagnosed with prostate cancer. A new study by Fred Hutchinson Cancer Research Center shows it lowers the risk of a recurrence and slows down the progression by as much as 59 percent.

Even so, the beverage continues to have a notoriously bad stigma. Experts blame it for impaired growth, heart disease and yes, even cancer.

That doesn’t make much sense when you look at what’s in it. The drink is full of anti-cancer compounds that inhibit cancer cell growth. It’s anti-inflammatory and high in antioxidants which fight free radicals.

What’s the cancer-fighting drink that still gets a bad rap?

Coffee, the drink most people like to call “their bad habit.”

And get this… In the studies done so far, the more coffee the men drank, the higher the protection. The men who drank the most (six or more cups a day) had a 60 percent lower risk of developing lethal prostate cancer.

Mostly, coffee has a bad reputation because of its high caffeine content. And six or more cups of caffeine a day sounds excessive, especially if you have hypertension. On the other hand, a small to moderate amount of caffeine can be good for you. Caffeine is an anti-cancer compound in itself.

If you’re concerned about drinking caffeine, there was an interesting side note that came out of the Harvard study. It didn’t matter whether the men drank caffeinated or decaf coffee. They still had a lowered risk. So caffeine wasn’t responsible for the protective effects.

The studies are especially good news when it comes to aggressive prostate cancer. Another study published in Nutrition Journal looked at men who drank more than 3 cups a day. Compared to men who didn’t drink coffee, the coffee drinkers had a 55 percent lower risk of developing prostate cancer.

While it’s clear that coffee has beneficial bioactive compounds that stave off disease, a quick word of caution… Caffeine isn’t the only concern. Coffee is also acidic. Drinking too much can cause stomach upset. We’ve said it before, and we’ll say it again: Consuming too much of anything, even healthy foods, isn’t always a good thing.

The studies are promising but we suggest you treat coffee like any other healthy drink. Drink it in moderation. You’ll get the most benefit if you drink it black and leave out the cream and sugar. Choose organic. And, of course, coffee will give you the most benefit if you’re already eating a healthy diet with lots of vegetables.

Unfortunately, this isn’t the only natural, cancer-fighting secret the mainstream is keeping from you. Like this one “better than chemo” treatment in particular…A study on people who received it for cancer and other ailments noted that “the results have been spectacular; the only side effect is ‘chronic good health.’” So why aren’t more doctors using THIS alternative, Nobel Prize winner-studied, natural solution instead? Find out here.