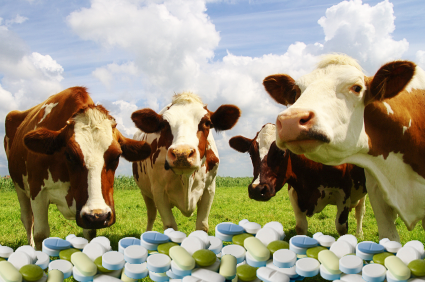 Does your beef taste a little bland these days? We’ve discovered why. And yet another reason why you should ALWAYS go organic.

Back in October we uncovered what cattle owners were really feeding their cows.1 A diet any four-year-old would drool over…one full of candy and junk food.

The use of hormones and antibiotics is no secret. Cattle owners give growth hormones such as rBGH to two-thirds of all beef cattle in the U.S. to rush growth and get them to slaughter faster.2 And they also give 22 percent of dairy cows hormones to increase milk production.

The European Union conducted a study and found that those hormone residues remain in the meat. The very meat you’re buying and eating.

It’s cancer on a plate. However, the U.S. doesn’t seem to agree. Japan, Canada, Australia, and the European Union have all banned the use of hormones.

But why doesn’t the U.S. do the same?

The cattle industry is now giving livestock an actual pharmaceutical drug called Zilmax. The drug industry used to call it Zilpaterol.4 It was supposed to treat asthma. But it was completely useless. Then the World Doping Industry had it banned. They discovered it produced muscle, similar to anabolic steroids.

The cattle industry saw this as a perfect opportunity. Merck re-branded the drug.5 They named it Zilmax, labeled it as a “growth stimulant,” and feedlots bought it up. Especially after the severe drought last year that forced farmers to start feeding their herds anything from sprinkles to Fruit Loops to fatten them up.

At first, ranchers were skeptical of the drug. But Big Pharma knew how to persuade them. Intervet, a subsidiary of Merck, hired West Texas A&M professor Ty Lawrence to sell their drug. Lawrence grew up in Texas; he was raised on a cattle ranch and has a drawl. Ranchers could relate to him. He was one of them after all. What they didn’t know was that Intervet was providing significant financial support for Lawrence’s lab and the university.

Bad news for us.

Studies reveal that Zilmax increased heart rate and caused tremors in people. One expert says that on hot days it can cause cattle to become heat stressed and go lame. So then why does the industry continue to use it?

They trust Lawrence. “We want to make better beef,” he said, “make more of it, and make it more efficiently.”

Zilmax makes the cows produce more muscle and less fat. That means more pounds. And the more pounds of beef to sell, the more money to make.

But there’s a problem with having the cows gain just muscle. Without fat, the cows don’t get the marbling that gives the meat all its juicy flavors. The beef becomes tasteless and bland.

“We’re not getting the beef we’re asking for,” said Paul Heinrich, an executive of the global food distributor Sysco.

Intervet once again called upon a university scientist to keep people quiet and calm. Brad Johnson received a $33,000 grant to find a way to enhance marbling and tenderization by using…chemicals! That’s right…more drugs to cancel out the effects of other drugs.

But what happens when the drugs used to stop the side effects of Zilmax start to have side effects? Are they just going to continue to keep adding more and more drugs?

It’s reported that major meat companies including Tyson Foods, JBS SA, Cargill, and National Beef Packing Co. all use Zilmax. They account for 84 percent of the meat market. Cargill, which refused to use the drug for years, once said Zilmax had taken the process to far. But last year they apparently jumped on the bandwagon.

If the FDA and researchers aren’t going to watch out for your health then you need to.

If you can, buy your meat directly from a farmer or rancher. That way you know exactly what you are getting. But most of all…always buy grass-fed and organic meat. Your health may just depend on it.