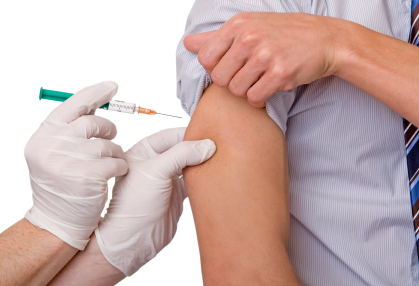 Flu season hasn’t even hit its peak month yet. But that hasn’t stopped it from hitting epidemic levels across the country. And we’re not just talking about outbreaks. We’re talking about deaths.1

Health officials and The Centers for Disease Control and Prevention (CDC) continue to urge people to get the vaccination. They say it’s not too late.

With 47 states reporting widespread flu activity, states of emergency are popping up across the country. It’s the worst flu outbreak in over a decade.

Doctors, hospitals, clinics, and pharmacies can’t keep up with the demand for flu shots. It makes you wonder… With almost half the of the U.S. population immunized why the huge outbreak? 2

Scientists are still using the vaccine formula created in the 1940s.

But the flu virus mutates all the time! So basically people are getting a vaccine for a virus that may not even be active. Simply put… there is no such thing as a universal flu vaccine.

There are three types of flu viruses: A, B, and C.3 From those three there are subtypes. And from those subtypes the virus can continue to mutate into a completely new virus.

To complicate things even more, there is no single virus that causes the flu.4 So in addition to the laundry list of toxins they inject you with, you’re also receiving a dead version of just one type of the flu. It’s only going to stimulate your immune system against that particular virus and possibly (if you’re lucky) similar ones.

Furthermore, the CDC admits the flu shot is only 62 percent effective. Not surprising. Yet they stand by its usefulness.

“The flu vaccine is far from perfect, but it’s still by far the best tool we have to prevent flu,” says CDC Director Dr. Thomas Frieden.

The CDC goes on to say the flu shots are working and the outbreaks are just a warning.5 A “warning” of what exactly? The only warning we see is that the flu shot doesn’t work like it’s supposed to. The annual flu death toll varies from less than 3,000 to up to 49,000.6 But the last time the flu circulated like this, 70,000 deaths in the U.S. were reported.7

And here’s the real kicker… The vaccine loses its effectiveness over time.

The flu season came on hard and heavy early this season. And it will probably last longer. The season doesn’t even peak until February or March. So anyone at the front of the line for a shot may have already used up their immunization—if there is even one to gain by getting the shot.

The numbers don’t lie. Many of the people who’ve gotten the flu this season are the very people who received the vaccine.

Bottom line: the vaccine isn’t nearly as effective as they’d like you to believe.  Not to mention the fact it’s filled with toxins that can do serious damage to your body.

Our advice to you is similar to the CDC’s. It’s not too late to protect yourself. But not with a vaccine. Stick with natural, safe, and proven solutions.

Also, increase your vitamin D intake and wash your hands. Vitamin D strengthens your immune system.8  And washing your hands stops the transfer of germs and bacteria.