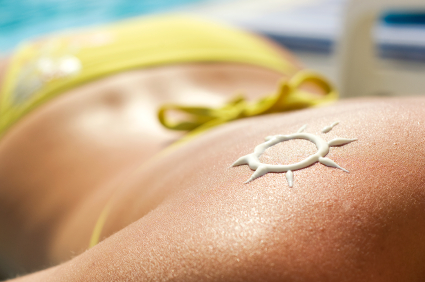 Summer is here. It’s a time to get outside and have some fun. It’s also a time when millions of people slather (or spray) on the sunscreen. After all, it’s supposed to prevent skin cancer. At least that’s what dermatologists and the skincare industry tells us.

But what if you learned that sunscreen actually increases your risk of cancer – including skin cancer? What if you found out that it can cause allergies, hormonal problems and cellular damage? Would you still use it? Would you cover your kids from head to toe?

Sunscreen is a huge moneymaker for the personal care industry. The summer months mean big bucks at the cash register. Fear of the sun also generates big money for dermatologists.

Skin cancer is the most common form of cancer in the United States. And melanoma is the most feared and deadly form of it. We have been told that the sun is to blame for this deadly disease. But the scientific evidence tells a different story. In fact, the science proves that a healthy tan could be your best protection.

The first tanning lotions were introduced around 1930. The goal was to allow you to stay in the sun longer without burning. A few years later, the melanoma rate began to rise. By the 1960s there were dozens of tanning lotions on the market. Melanoma rates continued to rise.

As the rates of skin cancer increased, it became news. And the makers of tanning lotions saw an  opportunity. They repositioned their products as “sunscreen.” After that, the sales of sunscreen continued to climb… along with the rates of melanoma.1 In fact, the per capita melanoma rate has increased 1,800 percent since the first commercial sunscreens were introduced.

In a moment, you’ll see why sunscreen is a contributing cause. But first, let’s examine the evidence that sun exposure is actually your best defense against this deadly disease…

Evidence that the Sun Protects You from Melanoma

Studies show that those who spend the most time outdoors have the lowest risk of melanoma.2,3,4 This includes a review of more than 50 research papers. It revealed that people who work outside have the lowest incidence of the disease. For example, lifeguards, construction workers and farmers have much lower rates than office workers.5

Another study reviewed all the published research in the International Journal of Cancer. It also showed that people with “heavy occupational exposure” have significantly lower risk.6

A similar study was performed by researchers at the University of Sydney’s Melanoma Clinic. Their results showed that office workers develop melanoma at twice the rate of lifeguards. Those who had the lowest incidence were sunbathers!

Population studies also show an inverse relationship between sun exposure and melanoma. For example, rates of the disease are higher in Minnesota than Arizona. They are also higher in Norway than the South of France.

Then there is the inconvenient truth that melanoma lesions frequently occur on parts of the body least exposed to sunlight. This includes the soles of the feet, under the nails, on the genitals and inside the nose and mouth.

The evidence clearly shows that those who spend more time in the sun (without burning) have less risk of melanoma. That is quite the opposite of what the anti-sun proponents would have you believe.

But what about sunscreen? Does it provide protection against the disease, as most dermatologists and skincare manufacturers claim?

Those are the questions that Dr. Marianne Berwick of the Sloan-Kettering Cancer Center asked. She reviewed ten of the best studies on sunscreens and the incidence of cancer. Her results were reported at an annual meeting of the American Association for the Advancement of Science. According to Dr. Berwick, “There is no evidence that use of sunscreen at any age offers any real protection against malignant melanoma.”

Could Sunscreen Actually Cause Skin Cancer?

We know that sun exposure (without burning) can provide protection against melanoma. We also know that sunscreens offer no protection. But could they actually cause cancer?

The evidence is affirmative. To begin with, the greatest rise in melanoma has been found in countries where sunscreens are used the most.7 Of course, this only establishes a correlation. To identify a a causal relationship, we have to dig deeper.

Here are four reasons why sunscreen can actually cause skin cancer (and other forms of cancer too).

Melanin is the pigment in your skin that is responsible for the tanning response. It is also inversely correlated with the amount of DNA damage that occurs due to excessive UV radiation.8 In other words, the tan produced by sunlight protects your skin from damage.

Sunscreen blocks your skin from producing this protective pigment. It prevents your body from employing its natural defense against overexposure to sunlight – a tan. If you use sunscreen regularly, you are more likely to burn without it.

There is no evidence that tanning is a risk factor for any disease. However, there is a lot of evidence that tanned skin – particularly during childhood and adolescence – provides protection against melanoma.9,10,11

Vitamin D is highly protective against internal cancers. That’s why people who live closest to the equator (where UV exposure is higher) have lower rates of colon, lung, breast, and prostate cancers. But it also protects against melanoma. In lab experiments, vitamin D has been shown to cause melanoma cells to self-destruct.12,13

It is beyond the scope of this article, but there are at least seven distinct ways that vitamin D fights and prevents cancer. We document these in detail in the book we published with Dr. Al Sears, Your Best Health Under the Sun.

#3 – The Chemicals in Sunscreen Promote Cancer

Most commercial sunscreens use chemicals to absorb UV light. Unfortunately, most of these chemicals are carcinogenic. That means they’ve been proven to cause cancer – the very thing these products claim to protect against!

One of the most common chemicals used in sunscreen is known as PABA or padimate-O. PABA is essentially harmless in the dark. However, exposure to UV light causes it to attack the DNA within your cells.15,16

One study that proved this was published in Mutation Research. It showed that when sunscreen containing padimate-O was used, it increased DNA damage 75-fold compared to the absence of sunscreen.17 Another study in Great Britain looked at the tendency of PABA to induce genetic mutation.18 The researchers stated:

“Chemically speaking, it is identical to an industrial chemical that generates free radicals when illuminated… Our results suggest that some sunscreens could, while preventing sunburn, contribute to sunlight-related cancers.”

And of course, this is just one of the common chemicals within sunscreen. There are at least half a dozen others that have been proven to promote cancer and disrupt your hormones.

Some of these chemicals mimic the effects of estrogen in the body. This can also promote tumor growth and speed the spread of cancer. And that’s not all. These gender benders can also cause a decline in male sperm count, trigger early puberty in girls, lower fertility in women and induce feminine characteristics in men.

In laboratory testing, all of these chemicals cause cancer cells to grow more rapidly. And they can have a synergistic effect when they’re combined. Two “weak” estrogen-mimics can produce a very strong response. These chemicals also penetrate the skin and enter the blood. That means they can exert their toxic influences throughout the body.20 Especially when you follow your dermatologist’s advice to apply generous amounts every two hours!

#4 – Sunscreen Does Not Block All the Rays of the Sun

For several decades, most sunscreens only blocked UVB rays. These are the rays that produce vitamin D. They are also the rays that cause sunburn. By blocking these rays, you could stay out in the sun for hours without burning.

But what the sunscreen manufacturers didn’t tell you is that their products did nothing to block UVA rays. While UVA rays don’t cause sunburn, they do penetrate deep into your skin. Prolonged exposure to UVA can cause cellular damage. It is also associated with wrinkles, premature aging… and skin cancer.21,22

Without sunscreen, it would be difficult to stay in the sun long enough for UVA to cause damage. You would start to get sunburned. And for your own protection, you would either cover up or go indoors. But sunscreen “short circuits” your body’s natural protection instinct. This allows you to stay in the sun for long periods of time, fully exposed to UVA radiation.

Some sunscreen manufacturers now make “broad spectrum” sunscreens. These are supposed to protect against both UVA and UVB rays. But most UVA sunscreens only have a sun protection factor (SPF) of about 4. Don’t count on sunscreens to protect you from UVA rays.

The use of chemical sunscreen is certainly not the only cause of the rise in skin cancer.

The increasing rates of skin cancer are also related to changes in the human diet. Science proves that some foods – foods we eat in abundance – strongly promote skin cancer (and other cancers too). On the other hand, there are other foods which strongly prevent skin cancer. And these are in short supply in the modern diet.

When foods that promote skin cancer are eaten in excess and nutrients that prevent it are absent, the skin becomes far more vulnerable to sunlight. In other words, we have artificially raised our risk factors for skin cancer, while simultaneously removing our natural defenses against it.

So what precautions should you take?

Well, hiding from the sun certainly isn’t the answer. In fact, your optimal health depends on moderate sun exposure and the production of vitamin D. But of course, you should never allow your skin to burn.

Use the common sense we used for eons. Get out of the sun before you start to burn. Seek shade when necessary. And if you’re going to be in the sun for longer periods of time, protect yourself with clothing and wear a cap or visor.

Thankfully, you can also find mineral-based sunscreens that are free of harmful chemicals. Some manufacturers tout titanium dioxide as an alternative to chemicals. But some studies show that titanium dioxide can also cause free radical formation DNA damage.23,24 Look for a chemical-free sunscreen that uses zinc oxide instead. It goes on thick… but it is safe and effective.

Editor’s Note: Did you know that you may be able to pinpoint cancer up to 19 months before your doctor can? And then you may be able to eradicate it from your body with natural supplements? One doctor from a respected medical institution developed a test that takes much of the guesswork out of diagnosing cancer. You haven’t heard about this on TV or in the press – and the FDA hasn’t told you either. But we’ve prepared a special presentation about this test that you’ll want to see right now. Click here to watch.