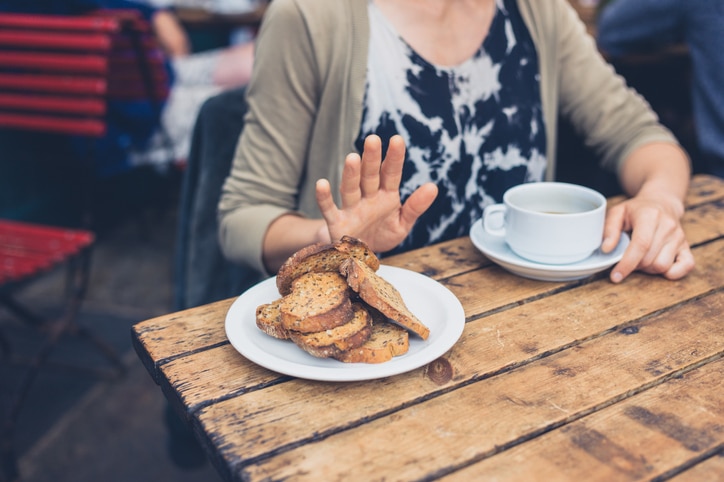 Think you’re on a gluten-free diet?

If you eat at restaurants, you better think again.

The research was conducted by Columbia University’s Celiac Disease Center. Armed with gluten sensors, more than 800 investigators went to restaurants around the country.

They looked for levels at or above 20 parts per million. Any food testing this high can’t officially be called gluten-free.

“Gluten-free” pastas and pizzas were the worst offenders. More than half of them served at restaurants have gluten, researchers discovered.

About 1% of Americans have celiac disease. It’s a disorder which causes the immune system to attack the small intestine. Ingestion of gluten triggers a painful and damaging response.

But studies indicate even people without celiac disease can suffer from gluten sensitivity. This can cause intestinal pain, mood changes, and lethargy.

Dr. Benjamin Lebwohl was the study author. He points out that awareness of gluten illnesses has increased in recent years. Accordingly, restaurants “have sought to offer selections that are compatible with these restrictions. Some establishments do a better job than others at preventing cross-contamination.”

“These results underscore the need for education in food preparation at restaurants,” said Dr. Lebwohl. “And the need for diners to inquire about these precautions.”

3 Ways to Keep Gluten Out of Your Diet

Aside from the obvious—avoiding bread and other foods made with wheat, barley, or rye—here are a few gluten-free guidelines…

Sushi restaurants are often viewed as a safe haven for gluten-free eaters. After all, there is no wheat in rice or fish.

But beware of soy sauce. Most of it contains wheat. Ask for tamari instead. It’s a slightly thicker, denser gluten-free version of soy sauce.

An Extra Helping of Turkey May Help People With Gluten Issues

The Truth About Gluten Sensitivity