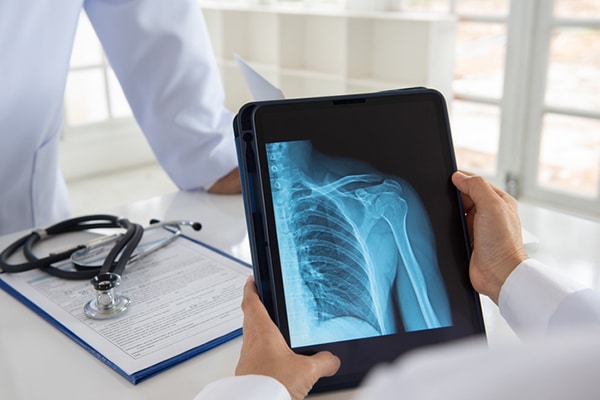 Osteoporosis is one of the biggest threats to your health as you age.

About 10 million Americans have it. Another 44 million are at risk for getting it because they have low bone density.i

One in five men and one in three women over age 50 will eventually suffer a broken bone because of osteoporosis.ii

Injuries such as broken hips can be debilitating. And they often force seniors into assisted living. Or worse… It starts a downward health spiral that is deadly.

Milk Is Not the Answer

Doctors often advise seniors to drink plenty of milk to keep their bones strong. But research shows that this can actually make bones weaker.iii

A Swedish study found that three glasses of milk or more a day actually increases the risk of bone fractures.iv

A separate study published in 2019 confirmed those findings. It showed that greater dairy consumption does not lower the risk of osteoporosis and hip fractures.v

So what can you do to keep your bones strong?

The study found that a diet rich in vegetables, nuts, olive oil, fish, fruit, and unrefined cereals can reduce hip bone loss within a year.

These foods are the basis of the Mediterranean diet.

The trial was led by the University of Bologna. It was the first long-term diet/bone health study of its kind.

More than 1,000 subjects between 65 and 79 were randomly placed in two groups. One followed the Mediterranean diet. The control group did not. Scientists measured participants’ bone density at the beginning of the study and again one year later.

The researchers checked bone density in area of the hip bone called the “femoral neck.”

Professor Susan Fairweather-Tait led the study. She pointed out that this particular bone area is very sensitive to osteoporosis. “Loss of bone in the femoral neck is often the cause of hip fracture, which is common in elderly people with osteoporosis,” she said.

Boost Your Bones by Eating These Foods

The Mediterranean diet is based on the meals commonly eaten in countries such as Greece and Italy. It’s simple to follow…

For years, it was recommended that women take calcium pills to avoid bone loss. That advice is outdated.

Multiple studies in recent years have found that there’s little to no benefit to taking calcium supplements to prevent bone fractures. And they may be harmful.

Researchers have linked calcium pills to increased risk of precancerous colon polyps, kidney stones, and calcium buildup in arteries that could lead to a heart attack.vii viii

The Mediterranean diet is a better, safer way to keep your bones healthy.