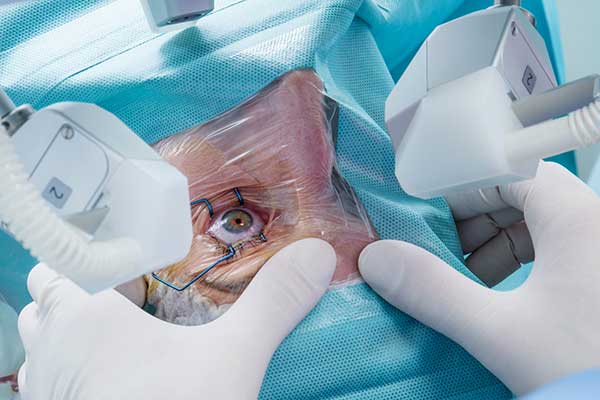 Lasik surgery to correct poor eyesight is incredibly popular. More than 700,000 Americans have it every year.i

But chances are, most of them don’t know that it has never been rigorously tested.

That’s because, unlike new drugs, medical procedures don’t require large-scale clinical studies before they can be used.

And of the few studies that tested Lasik, many were authored by doctors or laser manufacturers with a financial interest in the outcome.ii

But now, more than 20 years after Lasik was first used in the U.S., it’s becoming clear that serious side effects are common.

Think Twice Before Having Lasik Surgery

In Lasik surgery, doctors make a small cut in the eye’s cornea, or  outermost layer. Then they use a laser to remove some of the cornea tissue and reshape it to improve the person’s vision.iii

Patients can undergo the procedure for nearsightedness, farsightedness, or astigmatism. It costs anywhere from $300 to $4,000 per eye.iv

Insurance usually does not cover it because it is considered elective surgery.

Even though millions of Americans have already undergone Lasik, only in the last few years has the FDA performed the first thorough and independent study of the procedure.

Researchers followed 574 patients for up to six months after they underwent the eye surgery.

They discovered that nearly half (45%) of patients suffered side effects.

One side effect was particularly common and troubling. One third of patients suffered dry eye. In some cases, it was merely annoying. But in others it caused intense pain.

In some patients, the surgery didn’t even work. They had to return to wearing glasses.

In the wake of the study, the FDA issued a warning. It said, “Patients undergoing Lasik surgery should be adequately counseled about the possibility of developing new visual symptoms after surgery.”

The warning comes too late for Max Cronin.

Max became so depressed that he killed himself. His suicide note said laser surgery had ruined his eyes and his life.

Dr. Morris Waxler was on the FDA advisory board that approved Lasik in 1999. He now regrets his part in the approval process.vi

Lasik should never have been approved and it should be taken off the market, he said.

Don’t get Lasik surgery merely for convenience or vanity. It’s too risky. Stick with glasses or contact lenses.

You can help keep your eyes healthy by taking certain supplements.

If you’re considering Lasik, go into it with your eyes open. Know the risks. Understand that it may not be as safe as some eye clinics would have you believe.

Eating This One Fruit Can Save Your Vision