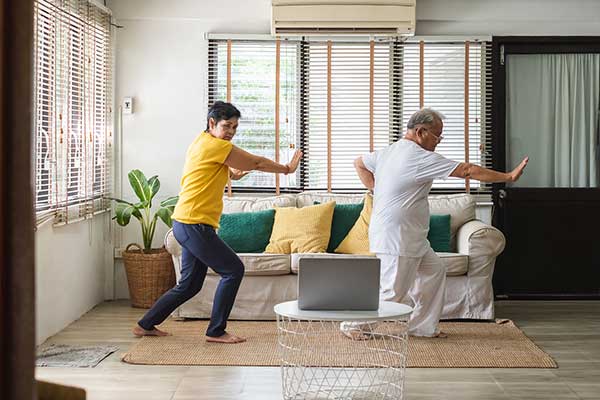 COVID Alert: More Seniors Are Falling. One Exercise Can Help.

About 25% of people between the ages of 50 and 80 say they’ve suffered a fall during the COVID crisis, according to a new study.i

Researchers say it’s because the pandemic is causing seniors to get less exercise, which reduces their physical conditioning. This makes them more likely to suffer an injury-causing fall.

Senior falls are a major health problem that often flies under the radar.

Every 11 seconds, an older American is treated in an ER for a fall. Every 19 minutes, a senior dies because of one.ii

The most serious consequence of falls are bone fractures. Hip, thigh, pelvis, and spinal bones often break. Seniors may also fracture bones in their hand, wrist, or arm when they reach out to try to break their fall.iii

Fall injuries are a major reason seniors end up having to move out of their homes and into assisted living. After getting hurt, they often find it difficult to live independently.iv

The obvious lesson is that older people need to make sure they are physically active during the pandemic so they reduce their risk of falling.

Tai Chi Cuts Risk of Falling in Half

Researchers at Stanford University found that one type of exercise may work better than others to help seniors avoid falls. The scientists tested it in 670 people over 70. All were deemed at high risk of falling because they had impaired mobility or a history of falls.v

T.C. Cowles is a program manager at Stanford who led some of the tai chi classes included in the study. “Patients that come regularly to tai chi classes report that they feel less wobbly and can walk better,” he said. “They build core strength, so they can hold themselves upright for longer periods of time.”

Tai chi is a low-impact exercise. You go through a series of motions named for animal actions. For example, “white crane spreads its wings.” As you move, you breathe deeply and naturally, focusing your attention on your bodily sensations.vi

Tai chi differs from yoga and other types of exercise in that movements are usually circular and never forced. Muscles are relaxed rather than tense. Joints are not fully extended or bent. Tai chi is easily adapted to people with physical problems.

To find a tai chi class in your area, go to the Tai Chi Foundation website HERE. Many in-person classes are now being held outdoors because of the pandemic.