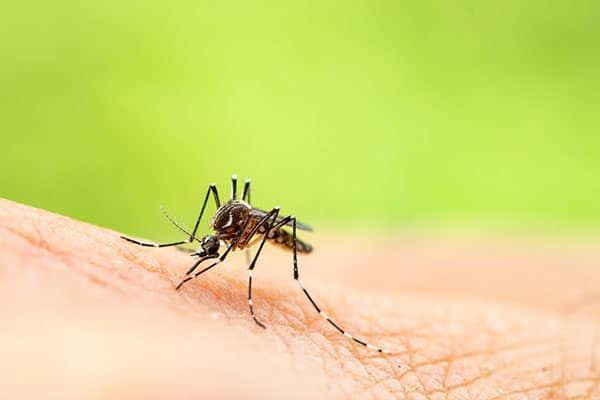 Nothing destroys a summer barbecue, poolside party, or a hike through the woods quite like a hungry swarm of mosquitoes.

Americans used to think of them as mere pests. The itchy bites were annoying, but nothing that could cause any real damage to our health.

Those days are over.

Mosquitoes in the U.S., like in many other parts of the world, have become major carriers of serious diseases. Zika, West Nile, dengue, and chikungunya are now well established on our shores.i

Many people use chemical bug repellents as their first line of defense. But that’s like coating your body in toxins. The primary ingredient in many commercial sprays and lotions is the chemical DEET.

DEET stands for N, N-Diethyl-meta-toluamide. Exposure to it has been linked to memory loss, headaches, weakness, fatigue, muscle and joint pain, tremors, and breathing difficulties.ii

DEET is so corrosive that it will eat right through plastic and fabrics made of spandex and rayon. It even dissolves watch crystals and nail polish. Yet, the manufacturers say we should smear it on our skin.iii

You don’t have to poison yourself to ward off mosquitoes. There are natural, safe ways to keep the bugs away:

If you do get bit, resist the urge to scratch. It only adds to the inflammation and discomfort.

Instead, place an ice cube on the bite for one minute. You may find the itch quickly goes away. Other people report that dabbing on a bit of hydrogen peroxide stops itching.

9 Mosquito-Repelling Plants that Protect You from Zika

Bug Bites Driving You Crazy? Don’t Scratch. Do This Instead.