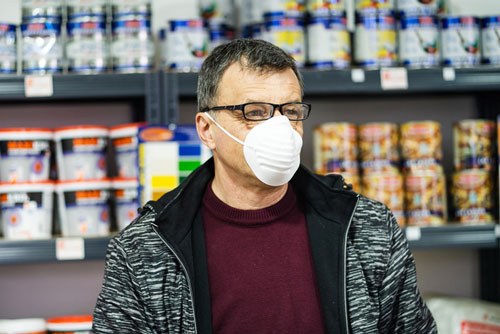 Every day the numbers grow bigger.

More people get coronavirus. And more people die of it.

We hear about overwhelmed hospitals. Patients being treated in tents. Morgues overflowing. The world economy in ruins.

No one knows exactly what’s coming… Except for perhaps one man.

His name is Michael Levitt. He is a biophysicist at Stanford University. Dr. Levitt won the 2013 Nobel Prize in chemistry.[1]

He built his career by creating mathematical models that predict how different proteins interact with each other on a molecular level. He developed software that accurately predicts the movement and location of atoms inside proteins.[2]

Dr. Levitt has been using the same principle to map the coronavirus pandemic and to project its course. So far, he’s been extremely accurate. He correctly calculated that China would get through the worst of its coronavirus outbreak long before many health experts said it would.

Now he foresees a similar thing happening in the United States.

While many epidemiologists are warning of millions of deaths, Dr. Levitt says the data simply don’t support such a dire scenario. This is especially true in places like the U.S. where reasonable social distancing measures are in place.

“What we need is to control panic,” he said. “We’re going to be fine.”

At the end of January as coronavirus was spreading in China, many experts made grim predictions of millions of deaths in that country. But then, on Jan. 31, Dr. Levitt recognized something in the numbers that others didn’t.

He noticed that China had 46 new COVID-19 deaths. This was up from 42 deaths the day before. Other experts saw this as evidence the pandemic was getting worse. But Dr. Levitt realized it was actually slowing down.

Although the number of daily deaths had increased, the rate of that increase had begun to ease off. Soon, he predicted, the number of deaths would be decreasing.

In the third week of February, Dr. Levitt predicted the total number of COVID-19 cases in China would end up at 80,000 with 3,250 deaths. His forecast was remarkably accurate.

China has had a total of 80,298 cases with 3,245 deaths. The number of new patients has now dropped to 25 cases a day with no community spread.

Dr. Levitt now sees a similar “signs of recovery” in the U.S. and other country.

What’s important is not whether the number of cases is going up, but the percentage growth in that number from day to day. “Numbers are still noisy, but there are clear signs of slowed growth,” he said.

He blames the media for causing unnecessary panic by focusing on the relentless increase in cases and celebrities who test positive.

He notes that the flu has sickened 36 million Americans since September and killed about 22,000, but those deaths go largely unreported.

The coronavirus spreads rapidly only when it is undetected and no one is acting to control it, Dr. Levitt said. When China and South Korea started testing for it and using social distancing, the spread quickly diminished.

He sees the same thing happening in the U.S. and other countries.

For now, the best thing we can do is exactly what we are doing…maintaining our distance from each other as much as possible.

“This is not the time to be going out drinking with your buddies,” he said.

Dr. Levitt says the numbers show that social distancing and increased testing are already starting to have a positive effect.

“The real situation is not as nearly as terrible as they make it out to be,” he said.

Editor’s Note: Now more than ever, you need to know about “infinite immunity.” It’s a recent Nobel Prize-winning discovery that gives your body the power to fight off virtually any infection. Find out more by reading our monthly journal, Independent Healing. Go HERE.