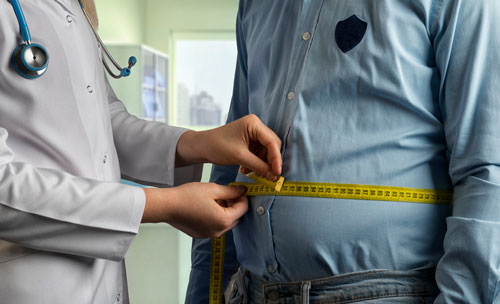 Researchers from the Miller School of Medicine at the University of Miami recruited 1,289 subjects with an average age 64.[1]

At the start, the research team measured the subjects’ waists and body mass index (BMI). After an average of six years, the subjects had MRI scans of their brains.

Dr. Tatjana Rundek was a study co-author. She said people with higher BMIs and bigger waists were “more likely to have thinning in the cortex area of the brain.” This indicates that being overweight or obese is linked to reduced brain gray matter.

Doctors associate a thinning cortex with cognitive decline… which in turn is linked to higher risk of dementia.

Dr. Rundek pointed out that the link was particularly strong in people under 65.

The study shows that being overweight “may accelerate aging in the brain by at least a decade,” she said.

This Is What’s Really Making You Fat

You may lose weight initially on a conventional low-calorie, low-fat diet. But 95% of people who go on a low-cal diet regain the weight they lost..[2]

That’s right… the success rate is only 5%.

That’s because calories are not what make you gain weight. In fact, calorie counting was originally devised as a way to gain, not lose, weight.

“I’ve looked at virtually every weight loss study going back 50 years,” said Dr. Jason Fung. “I’ve not found a single one showing that calorie restriction works, except in isolated cases[KG1] .”

Dr. Fung is a Toronto-based body-weight researcher and diabetes specialist. He is author of the bestselling book, The Obesity Code.

He and other obesity researchers believe that insulin is the true driver of weight gain.

The cells in your body need sugar for energy. But sugar needs insulin to transport it through cell membranes.

After you eat, your blood sugar rises. Your pancreas senses this and releases insulin.

Insulin then attaches to sugar molecules in your blood. This starts a process that signals body cells to open their membranes and take in sugar.

How does insulin affect body weight?

Too much insulin causes your cells to get more sugar than they can use. They convert the excess to body fat. You gain weight.

If you have too little insulin, your body can’t use sugar from food as fuel because the sugar can’t get into your cells. So it will be excreted in urine.

Instead, you’ll burn body fat. When your fat is gone, your body will start to metabolize your muscles. This is what happens in extreme cases of low insulin, such as in type 1 diabetics.

“Lack of insulin leads to weight loss, even to the point of wasting away until you die,” said Dr. Fung. “On the other hand, I can make any person fat simply by prescribing insulin to them,”

The bottom line? To lose weight for good, and keep your brain from prematurely aging, you need to know how to control insulin in your body.

Editor’s Note: Subscribe to Independent Healing to get the Weight-Loss-for-Life Protocol. It’s a step-by-step plan that tells you how to cut your insulin levels to lose weight without the rebound effect of traditional low-calorie diets.

To find out more, go HERE.

The Later You Eat, The Fatter You Get

Mild Cognitive Decline Can Make You 80% More Likely to Die

The Best Exercise for Brain Health

[KG1]Do we have another source for this quote? It wasn’t included in any of the sources given here.

[KG2]Same note as directly above.

[KG3]Same note as directly above.