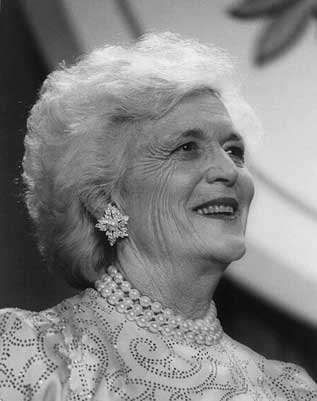 Do you know the three leading causes of death in the U.S.?

The top two are easy. They are heart disease and cancer.

But what about the third one?

Those would all be good guesses.

But this condition is more far more prevalent than any of those. And it causes far more deaths. But few people talk about it as a leading killer.1

Former First Lady Barbara Bush recently announced she is in the end stages of this disease. It’s chronic obstructive pulmonary disease, or COPD. Like many others with it, Barbara, 92, is on oxygen because her lungs are failing.2

COPD kills about 150,000 Americans a year. That’s roughly the same number as Alzheimer’s and diabetes combined.

About 30 million people in the U.S. have COPD. That’s double the number of people who have cancer.3 4

Barbara Bush Is Not a Smoker…So How Did She Get COPD?

COPD is a progressive illness. It slowly destroys your ability to breathe. The first symptom is typically a chronic cough. But by the time symptoms appear, the disease is often already advanced.

As COPD advances, patients’ lungs begin to fail. They lose their ability to absorb oxygen. Eventually, they need to go on oxygen.

There is no cure for COPD. Treatments only slow it down. Although COPD often takes many years to turn fatal, it robs patients of their quality of life. They are often unable to exercise. They may be tethered to an oxygen tank, making it difficult to do things they enjoy.5

About 80% of COPD cases are caused by smoking. This begs the question: How did Barbara Bush get it?

She was not a smoker. Nor does she have some of the other common risk factors. They include a job with exposure to chemical fumes or dust. Some people have a genetic disorder called alpha-1-antitrypsin deficiency that causes COPD. But there is no indication that this runs in her family.

However, Barbara, like most people in her generation, was exposed to another common COPD risk factor. It is second-hand smoke.6

During most of Barbara’s life, smoking was allowed just about everywhere. Several of her family members were smokers. So it is likely that she was exposed to second-hand smoke.7

A 2012 study in the journal Respirology found that children who breathe second-hand smoke have double the risk for COPD as adults.8

And women are at higher risk for COPD than men. Several studies have shown that their smaller airways are damaged more easily by smoke and chemicals.9

6 Ways to Keep Your Lungs Healthy

Of course, the best way to avoid COPD is to not smoke. Here are six other ways to keep your lungs healthy:

Barbara Bush is resting at home and has decided not to seek further medical treatment.15

“It will not surprise those who know her that Barbara Bush has been a rock in the face of her failing health, worrying not for herself—thanks to her abiding faith—but for others,” said a family spokesperson.

“She is surrounded by a family she adores, and appreciates the many kind messages and especially the prayers she is receiving.”