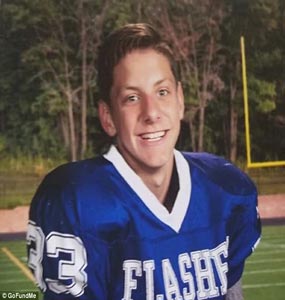 Charlie Harp was a normal, happy teenager. The 16-year-old was a wrestler and football player. He was popular in school.

His aunt Jackie Ray said, “You just never see him without a smile on his face.”1

Charlie was completely healthy except for a recent bout with the flu. After he got sick, his doctor gave him the antiviral drug Tamiflu and sent him home to recover.

Then something tragic happened. Charlie committed suicide within 24 hours. His family blames his death on the flu drug.

Not many people know it, but Tamiflu has long been linked to suicide and other psychiatric problems.

As far back as 2007, there have been documented cases of people mysteriously falling to their deaths after taking Tamiflu.2

One 14-year-old boy climbed onto his family’s condominium balcony and threw himself to his death. Two other people also fell from tall buildings and died.

Initial Japanese studies seemed to show only a small increase in mental problems on the first day of taking the drug. But further analysis revealed a different story.3

It showed that Tamiflu increased the risk “of abnormal behavior by over 50%.” Japanese authorities immediately restricted its use and required a label insert for Tamiflu that warns about psychiatric dangers, particularly in children.

In 2008, the FDA launched its own investigation.

Its analysis detailed the case of an 8-year-old boy. After a single dose of Tamiflu, he wouldn’t answer to his name and began growling like an animal.

In another case, a 14-year-old girl became so paranoid after taking Tamiflu that she swore that her food had been poisoned and she was being watched by somebody outside her house.4

In 2008, the FDA followed Japan and required a new warning label on Tamiflu sold in the U.S.

It says: “People with the flu, particularly children and adolescents, may be at increased risk of seizures, confusion, or abnormal behavior early during their illness. These events may occur shortly after beginning Tamiflu.”5

The warning goes on to state that “fatal injuries” from delirium and abnormal behavior have been reported.

In 2009, British pediatric doctors advised patients to stay away from Tamiflu, saying that the “likely benefits did not outweigh likely risks.”6

Tamiflu Tragedy: A Family in Mourning

Charlie wanted to recover quickly, so he started taking the drug in the car on the way home from the doctor, Jackie said. They were never warned about possible psychiatric side effects, she said.7

The next day, Jackie, who was Charlie’s guardian, became concerned when she texted the teen and didn’t get a response. She sent her husband Brad to check on him. He found Charlie in the garage, dead from a suicide.

The family desperately searched for an explanation. “What’s different?” Brad wondered. “He’s been the same. What did we do differently? And it clicked…he just started new medicine.”

Jackie says her family now wants to warn others about the dangers of Tamiflu.

“The thought of someone else not knowing and giving it to their children, I can’t bear that,” she said.

Even without the dangerous side effects, Tamiflu is not worth taking. Studies show it shortens the duration of the flu by only one day at best.8
Instead, consider these research-proven natural alternatives:9