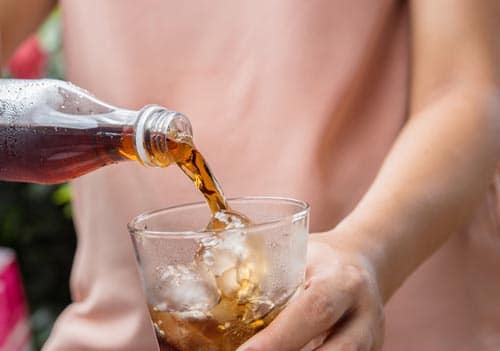 But not so enticing? They also contain a potentially carcinogenic ingredient. It’s an artificial sweetener called acesulfame potassium, Ace-K.

Like aspartame—the artificial sweetener long used in Diet Coke products—Ace-K is a high-intensity sweetener. It’s 200 times sweeter than sugar, so only a tiny amount is needed to achieve the same level of sweetness as sucrose.

(The company’s relaunched traditional Diet Coke, which will now be sold in a taller and skinnier can, will continue to be made with aspartame as the sole sweetener.)

Chemists discovered Ace-K in the 1960s, but the FDA didn’t approve it until 1988. The agency says studies “support its safety.” But critics warn that it isn’t well-studied enough to warrant mass consumption.

Michael Jacobson is president of the Center for Science in the Public Interest. “It’s a sleeper that no one pays attention to,” he says.

“I don’t think either side can say definitively it’s safe or dangerous.”1

Other experts, however, are convinced that Ace-K is dangerous and should be banned. They point out that the sweetener is a potassium salt containing the known carcinogen methylene chloride.

Although Ace-K is the least-studied of all artificial sweeteners, some early research showed a link to cancer in lab animals. In addition to cancer, long-term exposure to methylene chloride is linked to nausea, headaches, mood problems, impairment of the liver and kidneys, and vision problems.2

Artificially sweetened drinks are strongly linked to a higher risk of stroke and dementia, according to a 2017 study published in the American Heart Association’s journal Stroke.3

Researchers at the Boston University School of Medicine found that subjects who drank one artificially sweetened beverage per day were almost three times as likely to either have a stroke or be diagnosed with dementia.

Heather Snyder is senior director of medical and scientific operations at the Alzheimer’s Association.

“We know that sugary and artificially sweetened beverages are not great for us,” she says. “This study adds strength to that, and also says they may not be great for your brain.”4

Save Your Brain—and Body—From Artificial Sweeteners

You don’t have to risk your health to satisfy your sweet tooth. Here are healthy alternatives to artificial sweeteners like Ace-K:

Raw Honey. Look for 100% organic raw honey. If you can purchase it from a local source, even better. The darker the honey, the more nutrients it has.

Blackstrap Molasses. Not to be confused with regular molasses, blackstrap is a byproduct of sugar cane. It’s loaded with healthy minerals and releases its sugar slowly. This will keep your blood sugar levels in check.

Stevia. This low-calorie natural substance is made from the leaves of a plant native to South America. Its glycemic index is zero, it won’t spike your blood sugar. Make sure to buy organic.

Editor’s note: If you’re worried about your brain health, there’s something else you should know. The decades’ worth of study results on this natural herb extract are so promising, Big Pharma is trying to turn it into a drug. Get all the details here.