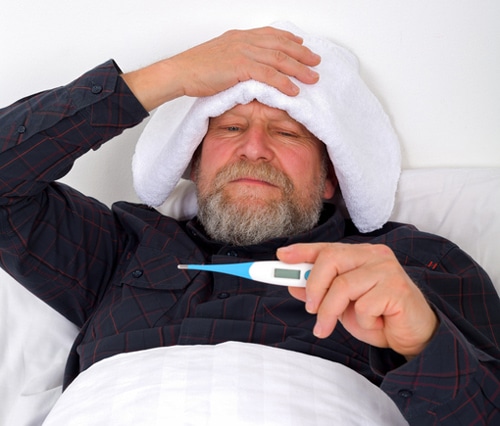 Men often are accused of acting like babies when they get the flu. Wives may shrug off the symptoms while husbands lay in bed miserable.

So the debate has raged… Are men hit harder by the flu or are they just wimps?

The phenomenon even has a name: “man flu.”

Even The Oxford English Dictionary has stepped forward and defined it as “a cold or similar minor ailment as experienced by a man who is regarded as exaggerating the severity of the symptoms.”1

Dr. Kyle Sue is a clinical assistant professor in family medicine at Memorial University of Newfoundland. He is author of the study. “Men may not be exaggerating symptoms, but have weaker immune responses to viral respiratory viruses,” he explained.3

“Men are more susceptible to them, symptoms are worse, they last longer, and men are more likely to be hospitalized and die from the flu.”4
Dr. Sue said it’s time for the medical community to recognize man flu.

“Medically treating both genders exactly the same will do both genders a disservice,” he said. “We already screen men earlier for cardiovascular diseases because they are more susceptible. Why should it be so controversial for men to suffer worse from colds and flus?”

His review was just published in the British Medical Journal.

One Australian study found that cells cultured from premenopausal women had a stronger immune response to rhinovirus than those from men of the same age. But when the women became post-menopausal and had less estrogen, their response dropped off.6

The researchers speculate that men have reduced immunity because it actually increased survival in their paleo ancestors. Early men were more likely to die from trauma than from infection.

And if they did get sick, an increase in symptoms could actually save their lives. It would keep them less active, thereby reducing the risk of encountering a predator in their weakened state.

The study noted that male responses to flu “may include lying on the couch, not getting out of bed, or receiving assistance with basic activities of daily living, which could all be effective for avoiding predators.”

If you get the flu, your doctor may want to give you Tamiflu or Relenza. These antiviral drugs have a minimal effect at best.7

A better bet is to take vitamin C. This powerful immune system booster can reduce cold and flu symptoms by 85%. Take 3,000 mg a day.

We recommend the liposomal version of vitamin C. It’s absorbed better by your body.8

Here are four other natural ways to speed flu recovery:

You should be able to get organic green tea at your local grocery store. But try to find matcha green tea. Its antioxidant power is even more concentrated than normal green tea. You can get it online and at some health food stores.

Activity. It can be hard to stay active when you’re sick. But if you can manage it, exercise can kick your immune system into high gear.

Researchers at Appalachian State University discovered adults who exercised five days a week cut their flu duration in half. Exercise doesn’t have to be intense. Doing some sort of aerobic exercise, like walking or bike riding, is enough.

Elderberries. They are full of antioxidants. They help lower inflammation. Research from Israel found subjects who received 15 mL of elderberry syrup four times a day saw relief from their symptoms four days earlier than a placebo group.

Selenium. A study by the University of North Carolina at Chapel Hill showed even mild strains of flu hit selenium-deficient mice hard. And when they did become infected, the virus was more likely to mutate, which can extend illness.

Brazil nuts and beef liver are good sources of selenium. But your best bet is to take a quality supplement. Don’t take more than the label recommendation. Overdosing on selenium can lead to thyroid issues and fatigue.