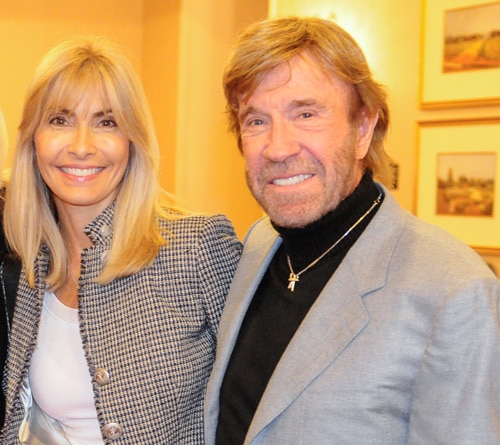 For years, people have thought MRIs were safe. They allow medical imaging without harmful radiation like with X-rays. Just some loud noise and a tight squeeze to deal with.

In 2013, Gena went to an imaging center for an MRI to check for rheumatoid arthritis. She had three MRIs in eight days. Soon afterward she began to suffer from severe nerve pain, kidney problems, difficulty breathing and swallowing, tremors, and joint pain.

“I felt like my whole body was on fire—as if acid had been passed through it,” Gena said. “It just kept on spreading.”1

She spent five months in a treatment clinic fearing that she would die. “Chuck slept beside me on the couch and never left. I had to be fed baby food. I prayed that I would live to raise my children,” she said.

“I’ve given up my film career to concentrate on Gena,” said Chuck Norris. “My whole life right now is about keeping her alive.”

It wasn’t the MRI scan itself that wrecked Gena’s health. It was the contrast dye injections she received before the MRI scans.

The solutions contained the heavy metal gadolinium. This metal is used by radiologists because it quickly absorbs into body tissues and improves the clarity of the scans.

Previously, doctors believed it passed harmlessly out of the body within hours. But now, research finds that this toxic heavy metal can remain in the body— including the brain—where it can wreak havoc on your health.

Gadolinium contrast agents are used in about one-third of the 60 million MRI scans performed worldwide each year. The metal was first introduced into the dyes in 1988.

In 2016, researchers from the University of North Carolina did a review of studies of the health effect of gadolinium used in MRI scans. What they found was scary:2

They published their study in the American Journal of Roentgenology. But it isn’t the only research showing clear health risks.

A 2014 study at the University of Teikyo in Japan found gadolinium deposits in the brains of patients given the same injections that Gena Norris had.

Gena Norris was bedridden for five months with an IV drip of chemical salts. This was an attempt to flush the gadolinium out of her body. She required round-the-clock nurse care.

She has spent $2 million on treatment—something she realizes most people cannot afford.

“It’s infuriating and heartbreaking—it’s a vicious, ugly secret that has been kept hidden—something Chuck and I are determined to change,” said the 54 year-old mother of 16-year-old twins. “Before this, I was a vibrant person. In fact, I’d say my health and fitness levels would have put me in the top 10% of people in the world back then.”

The couple has filed a lawsuit against several drug companies that make the dye-contrast agents. The Norrises are seeking to put an end to the potentially harmful practice.

Despite the growing research against the use of gadolinium, in May the FDA said it found no evidence that gadolinium retained in the body was harmful. But the European Medicines Agency, an organization comprised of private and public health officials, recommended restricting—even suspending—the use of these dyes.

If you need an MRI, stay away from gadolinium-based dyes. Ask for an MRI that doesn’t use dyes. There are also safer alternative dyes available that do not contain gadolinium. A recent study at Massachusetts General Hospital found that manganese-based MRI contrast agents can provide comparable image quality, but with more rapid clearance and less likelihood of toxicity.3 This may one day replace gadolinium-based dyes.

For now, sonograms, which use ultrasound, and low-radiation X-rays are often comparable diagnostic alternatives.

Doctors also have a relatively new tool in their diagnostic arsenal: Musculoskeletal ultrasound (MSK US).

This safe, noninvasive scan produces 3D images of joints, tendons, muscles, ligaments, and other soft tissues. It can diagnose tears, sprains, inflamed joints, and the presence of arthritis with clarity similar to an MRI, but with zero health concerns.4 5