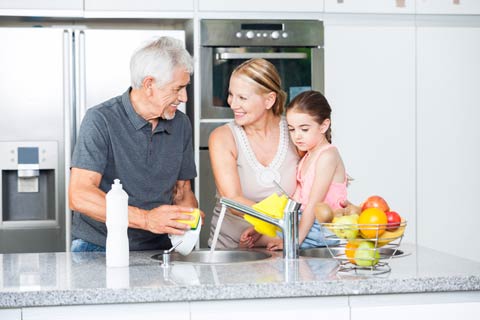 You wouldn’t think of using your toilet seat as a cutting board. But a new study shows that many people would be better off if they did.

That’s because the germiest object in their home is what they use to clean to their kitchen.

Researchers at Furtwangen University in Germany tested kitchen sponges in private homes. The goal was to find out how much bacteria lives on them.

The answer? A lot.

They found 118 different kinds of bacteria. They included pathogens that can cause serious infections in humans, such as E. coli, staph, and strep.

The study reported that sponges spread microbes throughout the kitchen. As a result, toilet seats are actually cleaner than most kitchen surfaces.

The study concluded: “Despite common misconceptions, it was demonstrated that kitchen environments host more microbes than toilets. This was mainly due to the contribution of kitchen sponges, which were proven to represent the biggest reservoirs of active bacteria in the whole house.”1

A kitchen sponge holds 200,000 times more germs on average than a toilet seat. The smooth, cold surface of a toilet seat provides a relatively poor environment for bacterial growth. Sponges, on the other hand, are perfect moist, often warm, incubators for bacteria.2

Food preparation repeatedly introduces new bacteria into a kitchen, which ends up on the sponges.3

Why Cleaning Is Not 100% Effective

The study, recently published in in the journal Scientific Reports, revealed another surprising finding: It’s difficult, perhaps impossible, to disinfect a kitchen sponge.

Microwaving or boiling gets rid of a large percentage of bacteria…about 60%. But the remaining microbes quickly “re-colonize.” The surviving bacteria develop a resistance to cleaning methods, the study showed. So cleaning becomes less and less effective.4

Bleach, lemon, or vinegar soaks are other ways people commonly clean their sponges. But previous research has shown these methods are not 100% effective, either.

Within a few days, sanitized sponges are as germ-ridden as they were before being cleaned.

One Way to a Germ-Free Sponge

Researchers found that new sponges are bacteria-free. And they take about week to becoming colonized with germs.

The study concluded that using a new sponge each week is the only method that effectively fights kitchen bacteria.

Considering that kitchen sponges often cost less than 50 cents, this is a worthwhile investment. If it saves you or someone else in house from getting sick, it is money well spent.