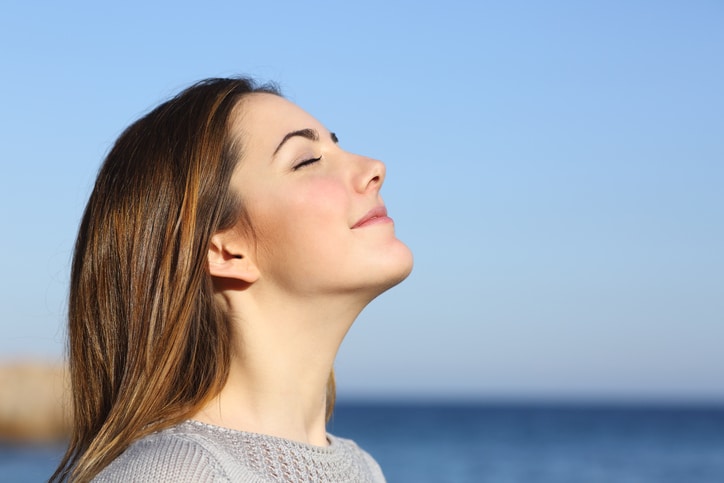 Breathe in slowly, deeply, and smoothly. Now exhale slowly. Did you feel a  sense of calm?

Now breathe rapidly. You probably felt a small surge of tension. Why?

Deep breathing has been used since ancient times to ease stress. But the question of why it works has never been answered by science…until now.

Stanford University and University of California researchers analyzed what happens in the brain when different types of breathing occur.

Using lab mice and sophisticated genetic engineering, they discovered there are 175 brain cells that monitor breathing as a matter of survival.

“If something’s impairing or accelerating your breathing, you need to know right away,” said Dr Mark Krasnow. He’s a professor of biochemistry at the Stanford University School of Medicine and an author of the research paper.1

The researchers killed different neurons in different mice. Through a process of elimination, they were able to isolate the brain cells that monitor excited or rapid breathing. When they killed these particular neurons, they noted a remarkable change in the mice’s behavior… They were far calmer and peaceful.

Dr. Kevin Yackle led the study. He researches physiology at the University of California-San Francisco. “If you put them (the modified mice) in a novel environment, which normally stimulates lots of sniffing and exploration,” Yackle said, “they would just sit around grooming themselves”—evidence of what passes for calmness when you’re a mouse.2

Previously, researchers believed these neurons regulated breathing. But the new study shows that’s not true. In fact, the neurons monitor breathing and regulate the brain’s reaction to it. The neurons report their findings on breathing rate to an area in the brain called the locus coeruleus.

If you are breathing fast, the locus coeruleus triggers anxiety and stress, putting you on high alert and sharpening your reflexes. This is a survival mechanism that helped primitive man survive.

Conversely, if you breathe slowly, the locus coeruleus tells the rest of your brain to relax.3

The new study shows that you can alter your mood simply by changing your breathing.

The research recently was published in the journal Science.

The best deep breathing exercise involves exhaling for a few seconds longer than you inhale. This slows your respiration and causes relaxation. Here’s how to do it:5

If the two-four count feels too short, try increasing the breath lengths to four in and six out, or six in and eight out, and so on. But if longer breaths create any anxiety, reduce the count. The most important thing is that the exhale is longer than the inhale, not the absolute length of the breath.