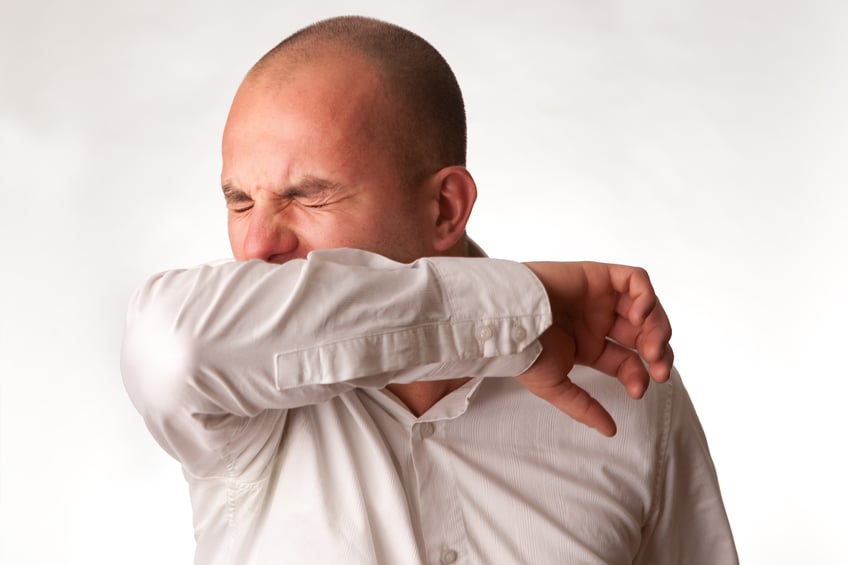 Sneezing is one of the primary ways disease is spread. You can catch anything from a cold to meningitis to tuberculosis from another person’s sneeze.1

In an effort to understand the dangers of a sneeze, MIT launched an exhaustive study. Scientists wanted to know how far and how fast the germs spread.

Researchers used high-speed cameras recording 4,000 frames per second to minutely detail what exactly emanates from the nose and mouth during sneezes.2

They discovered that a sneeze happens surprisingly fast. From start to finish it lasts only 15/100ths of a second. It is also extremely concentrated. A sneeze contains about 40,000 suspended droplets of vapor that are full of bacteria, viruses, and other microbes.

And here’s the worst part… Most of us figure we’re safe if we’re not right next to a sneezing person. It turns out sneezes travel farther than most of us think.

Scientists found that droplets reach ceiling height and can travel 26 feet away from a sneezer.3

The photo below, taken during the study, illustrates how quickly the germs from a sneeze spread. The entire sequence from frame (a) to (f) lasts only about a third of a second. But in that brief time, the sneeze travels more than two feet (70 cm) away from the sneezer. A Sneeze Is a 100 MPH Fastball

A sneeze begins when nerve endings send a signal to your brain that it needs to rid itself of an irritant in the lining of your nose. This causes a deep breath and increased air pressure in your lungs, which is expelled through your nose and mouth at speeds in excess of 100 mph.4

In less than two seconds, large droplets fall within 6 ½ feet of the sneezer. But it turns out you’re not safe outside of that range, either.

Smaller germ-filled droplets remain suspended in the air. Scientists discovered this disease-causing cloud travels up to 26 feet indoors. This means you’re in danger of infection even if you’re across the room.

Of course, everyone should cover their nose and mouth when they sneeze. But we’ve all seen cringe-worthy examples of people who neglect to do so. And sometimes a sneeze can take you by surprise and leave you without a chance to cover your face.

This makes it crucial that you stay home when you’re sick. Even if you have your own work space, the new study shows that your sneezing could infect your co-workers.

Recommended for You: The most crucial anti-aging nutrient for your body

It gives you energy, improves immune function and has tremendous heart benefits. Preliminary evidence shows it can slow down Alzheimer’s, treat Parkinson’s and reduce the damage caused by stroke. Your cells use it to produce energy… And it delays the aging process!
But starting at age 20, your body’s levels of it start to drop. By the time you’re 80, it’s all but disappeared. Luckily, it’s easy to get in supplement form. Find out how to get all the details, HERE.

The best way to catch a sneeze is to cover your nose and mouth with a tissue. If you don’t have tissue? Most of us cover up with our hands. That’s wrong.

First, your hands are often not clean. This means you could bring germs to your sinus openings, making yourself sicker. And second, after the sneeze, your hands can readily spread your germs to others.

The CDC recommends instead to sneeze into the crook of your elbow. It’s safer for you and those around you.

There’s something else you should know about staying well as we head into cold and flu season… Our special report, Bulletproof Your Immunity: Easy Ways to Protect Your Health is an important read for you and your family.

You’ll discover the three most important vitamins your body needs this time of year… And how to avoid the five biggest immune threats.