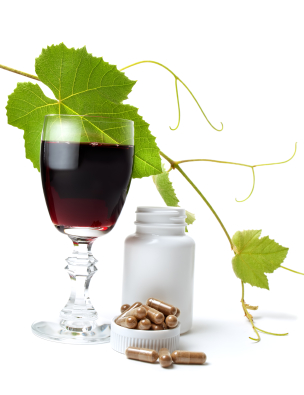 Resveratrol is a popular antioxidant praised for its anti-aging and heart benefits.

But a new study in the July 22 issue of The Journal of Physiology says it blocks the heart benefits of exercise—like lower blood pressure and cholesterol.

The researchers followed a group of inactive men in their 60s for eight weeks and had them exercise. They found that the men who took resveratrol saw 45 percent less oxygen uptake than a placebo group.1

At first glance, it looks like pretty solid evidence.

But there are too many studies showing the benefits of resveratrol. Naturally, we questioned the new study. We dug a little deeper.

The new study’s numbers are off. Here’s why…

In the new study, the researchers gave the men 250 mg a day. That’s an awful lot of resveratrol. Even the researchers acknowledged they used a very big dose. It’s much more than previous studies have used.

Other research shows resveratrol in smaller doses has heart-healthy benefits for men.

For instance, in one study obese men were given 150 mg of resveratrol. After 30 days, their blood pressure numbers went down 5 percent.

A one-year study published in the American Journal of Cardiology shows you only need 8 mg of resveratrol per day to decrease the C-reactive protein associated with heart disease risk by 26 percent.

8 mg… That’s over 3,000 percent less than the amount used in the most recent study.

This is definitely a case of “less is more.”

Take the “French Paradox” for example… In France, they get their resveratrol mostly from red wine. In 2010 their annual wine consumption was about 47.5 liters per person.

France also has one of the lowest rates of heart disease despite their consumption of both breads and high fat foods—there’s the “paradox.” The country averages about 29 deaths a year from heart disease per 100,000 people.2

Contrast that with the world leader in heart disease deaths. That happens to be the country of Turkmenistan. They drink an average of 4.5 liters of red wine per person.3

But this doesn’t mean you need to open a vineyard either. Let’s do the math on this.

To get even 20 mg of resveratrol, you’d have to drink 220 ounces of red wine. That’s around 40 glasses.4 You obviously can’t drink that much to get the benefit.

Taking huge amounts of any supplement—especially in synthetic form—is never a good idea for anyone. The new study uses a very high dose that isn’t typical of what you’d get from your diet.

That’s why getting your nutrients from whole foods is usually the best way to make sure you get all the benefits. In whole food, all of the nutrients work together…and in the right doses.

Based on the studies showing lower amounts of resveratrol are healthy, we still recommend it. An amount of 10-20 mg is more than enough. But not enough to cause harmful side effects.

Be careful in choosing your supplements. Most of them have way too much resveratrol per serving. They can have as much as 1,000 mg per serving.

You can also get resveratrol in smaller amounts from natural foods. Some of the tastier sources include acai berries, cocoa, dark chocolate, and red wine.

It’s important to point out that there aren’t many human studies on resveratrol.5 Even though this latest study may look like bad news, it does not discredit earlier studies that show its health benefits using smaller amounts.

So don’t write off this potent antioxidant just yet… Just be sure that you get your resveratrol from quality supplements and natural sources. You’ll experience all of the perks of without the risk.

There are plenty of other natural, safe, and effective ways to protect your heart, too. Get the scoop on the real, natural solution that one cardiologist credits with restoring heart health to almost every single one of his patients. And the easy way to implement it in your own life, today. If you want to protect your heart, I urge you to learn more now.